After a hectic few days exploring Colombo and the hill country, we’re kicking back on one of Sri Lanka’s lovely Southern beaches at the little town of Mirissa. It’s hard to believe we’ve already been here for two weeks as the time seems to flown by. Hopefully, now we’re on a beach it’ll slow down a bit!

I’ve not been back to Sri Lanka since 2004. Since then the bloody war between the Government and the Tamil Tigers has ended (not without controversy) and the country appears to be entering a new era of prosperity – mostly on the back of Chinese investment. Colombo is certainly changing. New multi-storey hotels are springing up all around the lagoon at the back of Galle Face Green in the area formerly known as Slave Island. It’s the same along the Galle Rd where new shopping centres and apartment blocks have replaced many of the low rise buildings. Colombo is growing in both stature – and height.

Despite this, there’s a lot that’s still familiar and unaffected by the rush to modernity. Pettah still maintains its warren of backstreet bazaars & crush of humanity of all races and religions. Manning market adjacent to Fort station still sells fresh produce in the traditional way & hasn’t altered for donkey’s years. It’s a fascinating place to wander around, watch people and discover all manner of exotic fruit and veg that many Westerners have never even seen before – much less eaten.

Inside the old Manning Market, which hasn’t changed in donkeys years

One place that’s successfully made the transition from old to new is the former Dutch Hospital in the cities business district. Situated opposite the World Trade Centre, It’s a well-executed restoration of a single storey colonial building with red roof tiles that surrounds two courtyards this historic building has been transformed into a centre for several restaurants & bars. It’s home to the famous Ministry of Crab – a seafood restaurant with a reputation as one of the top restaurants in Asia (I’ll let you know if that title’s deserved before I leave as we’re booked in on our last night!).

The Ministry of Crab, inside the former Dutch hospital.

Food is certainly one of Sri Lanka’s highlights. Most mornings we’d start the day with string hoppers eaten at a local café near our hotel. Served with a lush coconut chutney, curry sauce and dahl, they’re both cheap and delicious (breakfast for the two of us would cost about £1.50). In the evenings we’d eat at one of the food stalls set up on Galle face Green. Here you can enjoy devilled squid for around £1.75 or seafood Kottu for £2. Vegetable rice will set you back £1. The Green’s also a great place to sit and people-watch – especially on a Sunday when it’s jam-packed with locals enjoying their day off. There’s families of all religions, canoodling teenagers glad to be away from watchful parental eyes, hawkers selling all manner of plastic toys and dozens of kids flying kites in the strong sea breeze. It’s an ideal place to people-watch & observe Colomban’s at play from the shade of one of the palms bordering the green. 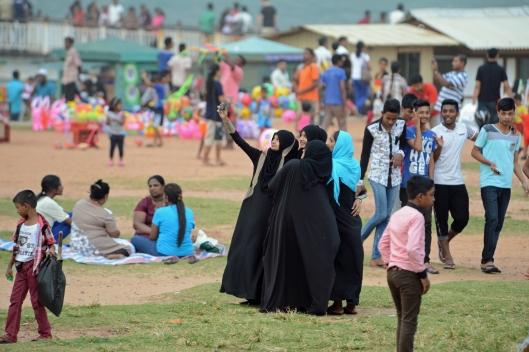 On our first night exploring Colombo we stumbled across a procession of priests and locals led by acrobats swirling fire wheels, accompanied by traditional drummers and dancers which disappeared into the World Trade Centre. After questioning an English speaking member of the group we discovered it was part of a ceremony to commemorate the 15 workers from the Centre who had died in a bomb attack by the Tamil Tigers back in 1997. Prayers were also said for all victims of terror around the world. We were invited to participate & sat in on the simple but moving ceremony which gave a fascinating insight into local life.

Drummers in the procession to the World Trade Centre ceremony

The modernity of the business district was a marked contrast to Slave Island, the area where we were staying. Here, the old rubs cheeks with the new, although a lot of the former colonial buildings have seen better days. They’re gradually retreating under the march of time & new Chinese money.

The changing face of Colombo. Old colonial buildings in Slave Island whilst a new Chinese funded tower dominates the skyline.

If you want to see more pictures from the trip, click on this link which will take you to the Sri Lanka gallery on my website.

I’ve a small favour to ask…
If you enjoy reading this or any of the other blogs I’ve written, please click on an advert or two. You don’t have to buy anything you don’t want to of course – although if you did find something that tickled your fancy that would be fab! – but the revenue from them helps me to cover some of the cost of maintaining this site (which isn’t cheap and comes out of my own pocket). Remember, 99% of the pictures used in my blogs can be purchased as prints from my other website –  https://paulbigland.zenfolio.com/