Every so often the anti Hs2 campaigners get outraged over something so superbly bonkers it’s worth highlighting to give people a laugh, so I’ve decided to start what I suspect will be a regular feature as their campaign has plenty of people who are either perma-outraged or simply as mad as a box of frogs…

Today the Sunday times has featured ideas on what the interiors of the new Hs2 trains may look like.
http://www.thesundaytimes.co.uk/sto/news/uk_news/National/article1534612.ece

None of this is actually new, but the Times mentions that the trains will have a range of classes, some of which will be fitted with leather seats.

This has caused absolute squeals of outrage from certain quarters, notably one Mop Denson, a Chilterns based anti campaigner. Mop is a regular, having frequently Tweeted that people should vote UKIP to ’save’ the Chilterns. The fact that UKIP don’t believe in man-made global warming & support fracking (so would do more damage to the Chilterns than good ) seems not to have occurred to her!

Mop has been busy tweeting that ;

I can only assume that Mop never travels on her local First Great Western services, which have err, leather seats in First Class (and have had since 2007!), or for that matter Grand Central or Hull trains, which also have the same. Here’s FGW’s; 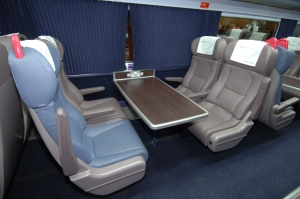 I presume that Mop will now be starting a campaign to remove such extravagances from our existing fleet & have them replaced with less hard wearing & more difficult to clean cloth ones?

I think we already know her answer; 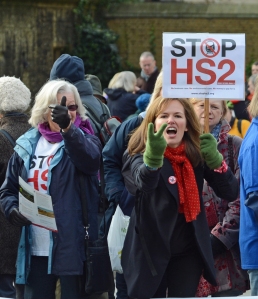 2 thoughts on “Crazy anti Hs2 campaigns of the week. No 1”