Earlier this week I spent a couple of days at the Railtex trade trade fair at the NEC in Birmingham. In truth, I could have done with being there for all three days as the show had a record number of exhibitors and an awful lot to see & do – and people to talk to.

The event was opened by Network Rail Chairman Professor Richard Parry-Jones who delivered a keynote speech in which he talked about way technology is transforming lives (and railways), the cost of providing extra capacity & his worry that the industry is under-providing capacity for future demand. Afterwards he went ‘walk-about’ to visit some of the exhibitors such as Siemens, Hitachi and Derby based Rail Vehicle Engineering Ltd (RVEL).

Meanwhile, the show was getting into full swing. The Chinese had a big presence this year with both CSR and CNR having large stands that must have kept Chinese model makers busy for months as both displayed huge numbers of product models – including CNRs high speed trains. On the CSR stand a signing ceremony was held to seal co-operation between the company & the universities of Birmingham, Southampton & Central London by forming the China-UK joint research & development centre for rail technology. In a statement, CSR said the centre would look at developing new technologies, new materials and new production processes.

Although they had separate stands, the two companies are merging to create the world’s largest railway equipment manufacturer. The merger should be complete by the end of the year.

Elsewhere, Hitachi were demonstrating their 3-D interior images and design theory of their ‘British Bullet train’ – a potential offering for Hs2. The design draws upon key influences from existing and influential rolling stock in the UK. Using these to look forward & address the needs of future passengers by providing a train that has the flexibility to grow and evolve with their needs. Take a look.. 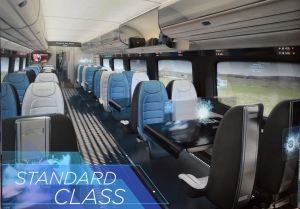 Could this be the 1st Class of the future?

The Europeans had been busy too. Siemens had a large stand showcasing their impressive array of products, including Trains, signalling systems & power supplies. In a low key launch the company had slipped out a model of a new 125mph EMU for the UK market – the Desiro Verve. Siemens told me they’ll be doing an expanded launch for this train later in the year.

Of course Railtex wasn’t all about new trains. One of the strengths of the event is variety of exhibitors from the massive multinationals through to the small UK companies who supply equipment & expertise worldwide. Railtex is the ideal opportunity to check-out what they have to offer. It’s also a fantastic place to touch base with companies you already work with -and meet potential new ones. I ended up working for several at the event itself as well as arranging new business. At the end of day 1 the networking event allowed many of us to meet in an relaxed atmosphere over a drink & some snacks before heading off to more events – or take the weight off tired feet!

Day 2 began with another keynote address, this time by Alstom UK President  Terence Watson (wearing his Rail Supply Group Co-Chair’s hat). Terence spoke about the value of the rail supply chain, how big the world wide market is – and how small UK exports are at the moment compared to the likes of China & Germany.

Wednesday seemed far busier than the first day & I found myself tied up with visiting as many of my contacts, colleagues & friends as I could before I had to leave. This meant that I missed out on many of the interesting seminars that I’d wanted to listen to altough I did make time to get to the Hs2 update. Sadly, Prof McNaughton was double booked, so a change in the programme saw him replaced by Jon Kerby, Director of BIM at High Speed 2 who talked more generally about the strategic implementation of BIM & the development of a digital railway. I’d have loved to have made it to the Thameslink & Great Western route modernisation seminars too, but I ran out of time. Another day – hopefully…

From my personal perspective Railtex was a great success. Many others I talked to thought so too. I’ll certainly be back next time. One theme I was left with was the continued development of rail technology & the growth of high speed rail. What was on offer at Railtex shows just how uninformed & stupid Jeremy Paxman’s Financial Times rant about HS2 & HSR being ’19th century’ really is!

If you want to see more pictures of Railtex,follow this link to the gallery on my picture website;