“I woke up this morning” – is the opening line of many a blues song – only in my case this morning was more like being wrenched into wakefulness by a paroxysm of coughing and spluttering. Like many people, Dawn and I have gone down with the traditional post-Christmas bug so it’s been a much more laid back Saturday then I intended. The pair of us have been coughing and hacking so much anyone walking past the house would be forgiven for mistaking it for a TB clinic.

The winter blues are one of the reasons I normally go abroad this time of the year. Everything seems subdued and miserable after the festive season, many people rein their horns in and count the pennies they haven’t got after overspending on Christmas so towns and pubs seem quiet. Even the weather has done it’s best to contribute to the general air of doom and gloom by pissing down for most of the 2018 we’ve had so far. A brief break in London helped lift my spirits but I’ll be glad when this damned cold’s buggered off – for both of us.

Meanwhile, in the spirit of a surreal age, when an American President takes to Twitter to assure everyone he’s not nuts but one of the smartest people on the planet – I’m heading for the drinks cabinet – whilst it and I still exist. Because, when this is the infantile level of the President of the United States – and supposedly the leader of the free world, we are all, deeply, deeply f****d. 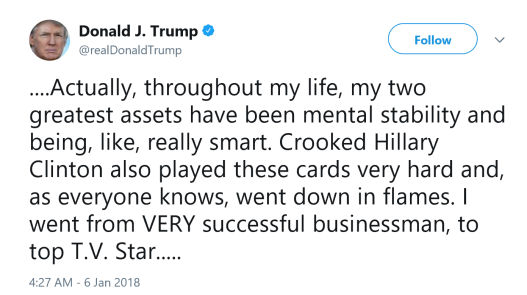