Today the weather really has changed. The broken cloud we had yesterday morphed into heavy grey, rainbearing skies this morning making the world look very different when I opened the bedroom blinds. It made me just how lucky that we’ve had over a month of near continuous sunshine just when we needed most. Imagine what people’s spirits might have been like going through lockdown when the weather was appalling?

Having kept my head down all Monday to complete my next article for RAIL magazine on the East London Line it was great to be able to put it to bed and get back to scanning my slide archive as that’s had to take a back seat this past week. I’ve several pages of my first set of pictures from 1989-90 to complete and I’m eager to get them finished as it feels like a milestone in what’s been a bloody long process! It’s not the most exciting of tasks, it’s very much a marathon, not a sprint, but after all these years it feels like the finisheing line’s in sight.

Whilst I’ve been doing this I’ve been kept entertained by a pair of Blackbirds who’re nesting in a tree at the back of the house. They keep foraging for food on the shed roofs opposite my office window and I’ve been helping them by keeping an eye out for the local cats who consider the area their territory. I’m making the moggies feel uncomfortable enough that they don’t hang around, giving the Blackbirds a free-fly zone. We have a cat ourselves but Jet is an old boy who’s 18 and a half, so his bird-catching days are long behind him. Oh, he’ll saunter around outside, but he’s unfazed by our feathered friends nowadays are barely gives them a second glance. The fact he’s as deaf as a post probably helps as he only notices them if they intrude on his line of sight.

I was so engrossed in the process of scanning and editing several batches of slies that the day flew by. before I knew it we were in to evening. Dawn’s got the week off from work so she’s been busy downstairs with DIY, and getting exercise that way, so I headed out for an evening constitutional on my own, in the rain! There was no way I was going to get my daily target of 12,500 steps. Even so, it was lovely to get out and experience the wind and rain on my skin after a long day sat at a desk.

Here’s a couple of the images I’ve been scanning. This is a classic image of a railway that’s gone forever. On the 8th March 1990 a pair of Class 56s pass at Barnetby East junction in Lincolnshire. Nearest the camera is 56088 with a loaded train of HAA coal hoppers on its way from Immingham Docks to Scunthorpe where the coal will power the steelworks furnaces. In the background is 56090 heading back to the docks with the empties. the signalbox and semaphores here lasted until Christmas 2015 when the area was resignalled. The Four wheeled HAA coal wagons are long gone too, having been replaced with much higher capacity bogie hopper wagons which are kinder to the track (amongst other things). 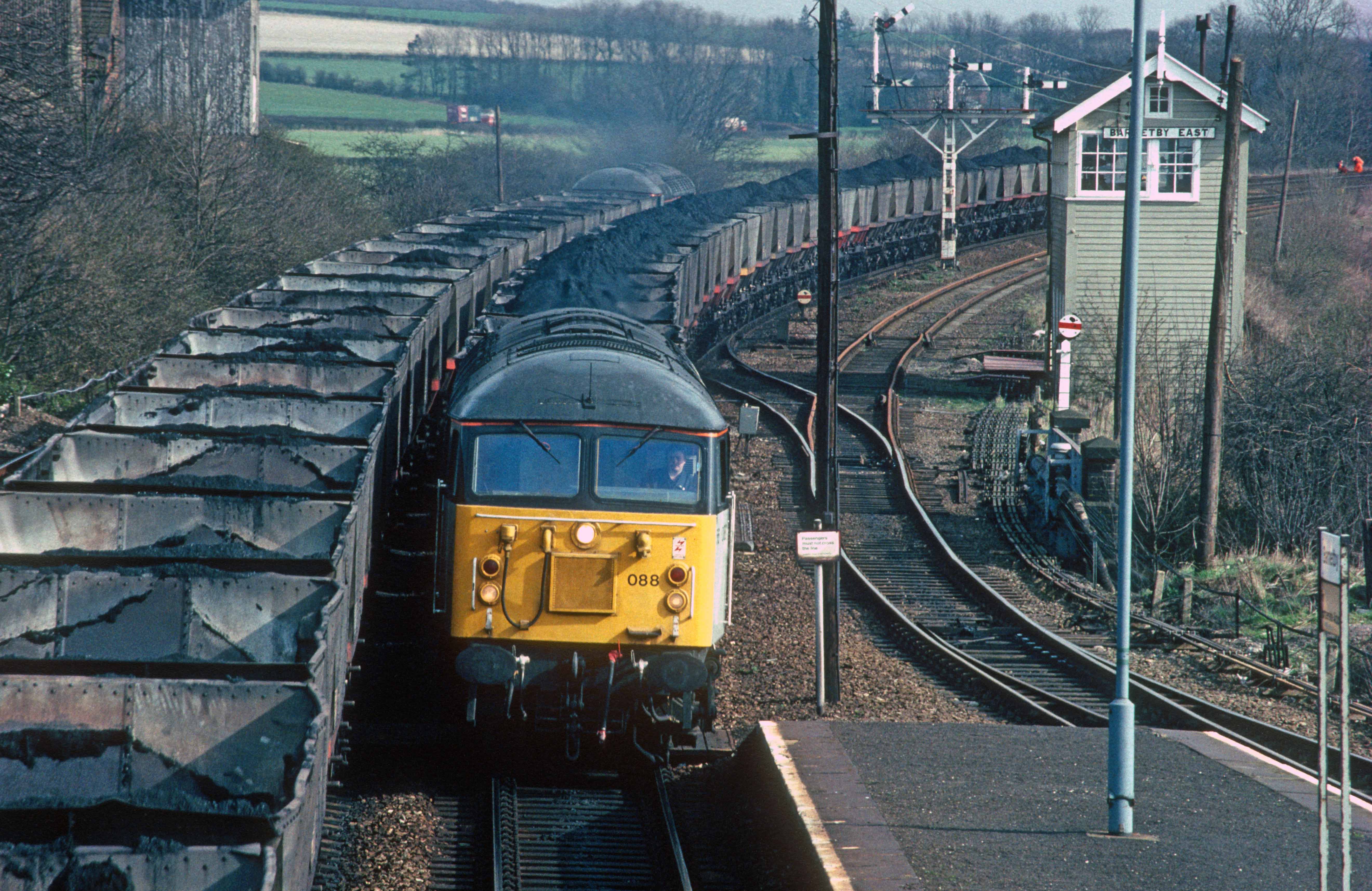 Here’s another, taken at Peterborough a few days later on the 12th March 1990 when the Class 91 locomotives were brand-new. Here’s 91011, named ‘Terence Cuneo’ (after the famous railway artist) out on a test train before entering passenger service. Now, 30 years later the Class 91 fleet is slowly being phased out of mainline service with LNER, although several are planned to remain in traffic until 2022. Will this plan survive the downturn in traffic due to Covid-19? Who knows? 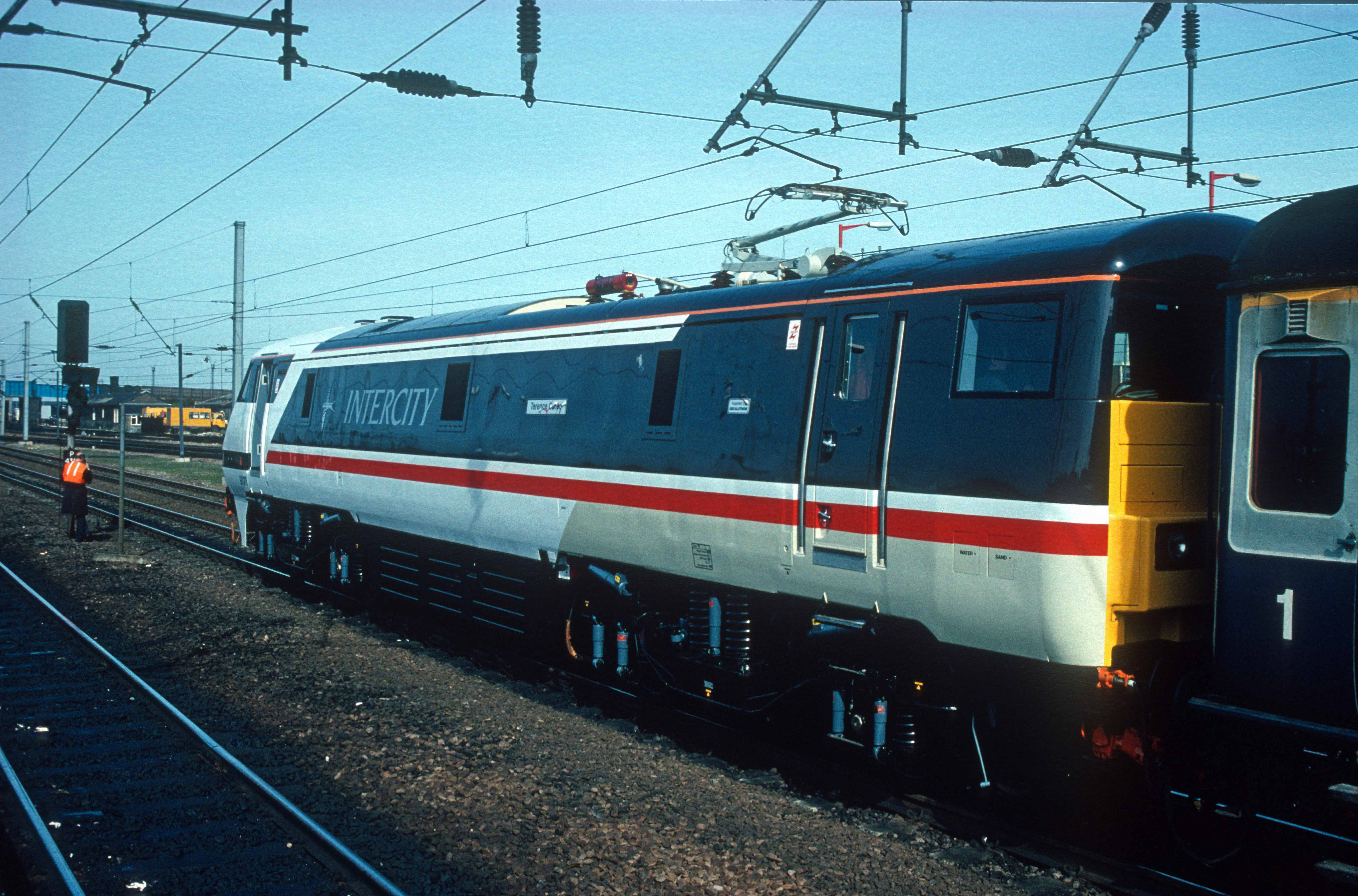 If you want to have a look through more of these old photos, follow this link to the ‘recent’ section of my Zenfolio website.