You have to laugh! StopHs2, the only ‘group’ left opposing Hs2 have come up with a cunning wheeze to explain the fact that the Hs2 Phase 2a hybrid bill sailed through Parliament with a majority of 246 last week. Their plan? Don’t even mention that it ever took place – just ignore the fact! So, there’s no mention of it on their website, or their Facebook, or in tweets. It’s as if it never happened!

You can understand why it’s an embarrassment to them as it underlines their complete irrelevance nowadays and the fact that what little political support they had has collapsed. I blogged about the result here.

How long Stophs2 are going to maintain this pretence is a good question. It’s certainly made a mockery of their claim that they’re ‘the’ place to go to, to learn about Hs2! But it is very funny! I’s yet more signs of the irrelevance of Stophs2 nowadays. Unlike the Phase 1 petitions, they weren’t even involved in the Phase 2a process at any level. No-one invited them along, so they rarely mentioned it. But then they’ve always been a campaign (and I use that term in its loosest sense) that’s been firmly based on Phase 1 of Hs2. Mind you, as their Chair, Penny Gaines actually lives in Bournemouth nowadays (no, really!) they’re even more isolated. Of course, quite what Penny chairs is open to question, as Stophs2 is little more than her and Kenilworth based Joe Rukin!

Meanwhile, some lone soul has decided to arrange another anti Hs2 demonstration in London via Facebook and Twitter! If it ever happens (which is extremely doubtful) It’s meant to take place on the 7th September.

Unsurprisingly, Hemel Hempstead based Woolf is also a Brexit fanatic. Oh, I wouldn’t bother with his Facebook page either as there’s little of interest, unless you like looking at someone posting lots of ‘selfies’ all about bodybuilding! His attitude to people on Twitter (where he uses the appellation @drophs2) doesn’t exactly inspire much confidence in his rhetorical or intellectual capacities either… 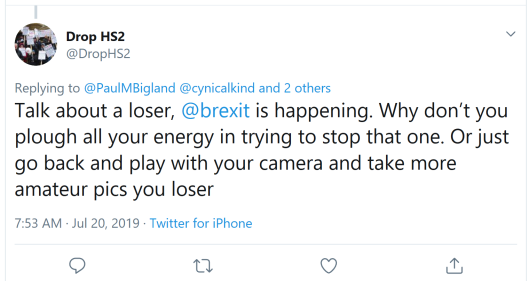 You have to wonder. There’s 6.5 million people living on the route of Hs2, yet there’s never been a credible anti Hs2 campaign. The best they came up with was the Hs2 Action Alliance – which at least had some educated people involved, even if they were only Chiltern Nimbys! Now it’s reduced to the likes of Rukin and Gaines, a couple of dozen ‘Walter Mitty’ types who still think ranting on Twitter will stop Hs2, few self publicists like young Woolf plus a handful of misguided Greens who can’t see further than the ends of their noses. Hardly what you’d call a ‘winning team’ is it? I popped in to have a look at the progress of StopHs2’s latest petition on the Government website this morning. It’s taken them 10 days to get another hundred signatures!

The petition doesn’t stand a hope in hell as to be on target they should have had 58,000 by now. It now needs over 800 every single day until October! I see no-one in Camden has signed it for almost 6 weeks now, leaving it stuck on a miserable 247.

I suspect StopHs2 are in for even more disappointment when (as is looking increasingly likely) the blond buffoon Boris Johnson becomes Prime Minister. The chances of Johnson cancelling HS2 are minimal (see link). They’ve previously been sold a pup by another Brexiter, Jacob Rees Mogg, who’s another one who says one thing and then does another. Having been quoted saying he’d cancel Hs2 he then goes and votes for it – several times in fact! You can read about that here. Their poster boys do have a habit of letting them down! I await Boris Johnson’s premiership with interest!