As I’m going to be away on a press trip to Vienna for a few days, Dawn’s suggested that we have a day out together, so we’ve decided to catch a train to the big city by venturing Westwards for an afternoon in Manchester. We’ll have a wander and do a bit of shopping, as well as a drink and a meal somewhere. Our favourite restaurant in the Northern Quarter has closed down, so we’ll be looking for somewhere new. No doubt I’ll have time to post a few pictures and comments, so watch this space.13:11We’re on our way after hanging fire due to the weather. This time last week we were basking in the sun. Today we’re dodging heavy showers blown along by heavy winds, which made the walk down to Sowerby Bridge station interesting to say the least.Now the pair of us are aboard the 13:06 to Southport which is worked by one of Northern’s unrefurbished Class 150s. Personally, I’d have preferred a Pacer but ho hum!…

14:40Two very different views of Manchester! First up is Japanese drummers outside a new branch of Uniqlo, which only opened two days ago.

Next up is the old Castle Hotel pub in the Northern Quarter. It’s a classic real ale pub and small music venue. 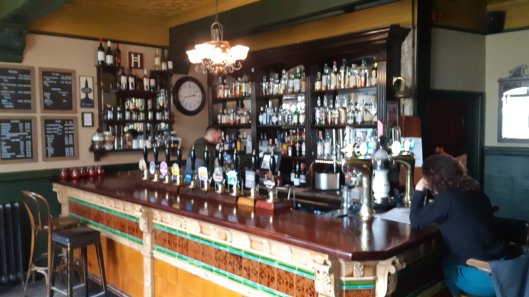