It’s a beautiful morning in London and the sun’s already cracking the flags. I’m sipping coffee in my hotel room in preparation for the day ahead whilst recovering from last night.

Yesterday’s Bradshaw address was a very interesting event, not so much because we learned a huge amount about what will be in the forthcoming Williams report (we didn’t) more because the event was packed with the great and the good from the railway industry and everyone talks. Afterwards, the Rail Delivery Group held an informal get-together for the media and other colleagues, which was just as informative as the main event, but Chatham House rules and all that. All I will say is that the night ended in the company of a long-time friend called Rupert (whom most in the rail industry will know) so it it was great fun, but I’m paying for it this morning!

I’m going to make my way home by meandering up the East Coast Main Line and have a look at some of the huge changes that are taking place as I go, so expect lots of words an pictures later…

After leaving my hotel near Kings Cross I walked over to Euston to check out progress on building Hs2, the new high-speed railway. Every time I visit something’s changed. There’s a huge amount of work going on as old buildings are torn down to make way for the expanded station, which is spreading to the West. I couldn’t help but crack a grin at seeing all the work going on then thinking of the few remaining Hs2 antis on Twitter who insist that none of this work means Hs2 is actually being built! Talk about kidding yourself!

Afterwards I headed back to King Cross to begin my meander North by catching a Great Northern service as far at Potters Bar, a place I have mixed memories of, and this is why. 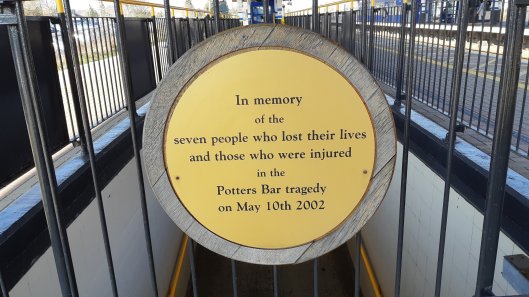 Within an hour of the crash happening I got a phone call to my North London home from RAIL magazine, commissioning me to cover the accident. I ended up spending several days at the scene, documenting the tragedy and the subsequent recovery operation. Journalists from all over the place had been scrambled to cover what was a major news story. The best vantage point was stop a wooden fence in the beer garden adjacent car park, which is where many of us ended up. I remember helping a rather posh middle-aged woman to climb the fence and we got chatting. She explains that she was a photographer who normally worked for ‘Horse and Hound’ magazine but had got a call because she lived in the area!

After the first couple of days the weather turned an rain set in, which bade life difficult for everybody. A huge crane had been set up to remove the car of the crashed train that was wedged under the station canopy and we were all keen to get a shot of the lift, this meant hanging around for hours and many of us took shelter in the pub! ITN had set up a huge cherry picker in the pub car park which they used for filming. Whilst they were waiting to go on air the ITN crew joined us in the pub and I got talking to Nicholas McGinty, their reporter. Nick wasn’t exactly dressed for the weather so I lent him my waterproof jacket whilst he did his piece to camera. In return, he arranged for me to go up in the cherry picker to get pictures! We met again a few years later at another rail tragedy, Ufton Herbert, Nick remembered me and I got another go in that cherry picker too. Thankfully, those times have changed and there hasn’t been a fatal rail crash since 2007.

I stopped off at a famous bottleneck on the East Coast Main Line, the two track section at Welwyn North. There’s been talk of quadrupling this section for decades but it’s no easy (or cheap) task at it contains a lengthy viaduct and two tunnels.

I’ve slowly been making my way up the East Coast Main Line, making the most of the stunning weather to top up my photo library with shots at some locations I’ve not visited in years.

It’s been an interesting experience that’s brought back many happy memories but also shown me how rapidly this stretch of railway’s changing. All the Great Northern services to Peterborough are now worked by the Siemens built, 12-car Class 700s. Now they go via St Pancras Thameslink and across London to Horsham instead of terminating at Kings Cross. The intercity fleets are changing too. Hitachi built Class 800s are up and down on test on a regular basis and are due to start displacing the BR built HSTs and Class 91s in a matter of months. They’ll also replace Hull Trains Class 180s. It’s not just the trains either. Network Rail is busy renewing the overhead lines and replacing cable headspans with portals.

I’m gradually getting North now after stops at Peterborough and Grantham. It’s such a gorgeous day that I want to make the most of the weather and get a few more shots in the can. Sadly, after all the rebuilding that’s gone on, Peterborough isn’t the photo opportunity it once was. That said, it’s interesting to observe operations there. The amount of intermodal freight trains that have to cut across the Northern approaches to the station to get to the Ely route and on to Felixstowe must be a train planner’s nightmare! No wonder Network Rail are building the dive-under from the GN/GE joint line.

I’m on the last leg after a final change of trains at Doncaster. Yet another LNER ‘Azuma’ flew past, luckily in full branding. That done, I couldn’t resist a visit to the Draughtsman, the tiny real ale bar on the station which opened in 2017.

Now I’m on Grand Central’s 18:04 service to Bradford Interchange, which takes me straight to Halifax and home. Tomorrow’s weather forecast isn’t great. The run of fantastic weather’s coming to an end, so it’ll give me chance to have a day at home catching up on paperwork and plans – as well as editing all the pictures that I’ve taken over the past couple of days!

Right, time for a ‘swifty’ in my local before heading home. It’s goodnight from me…