After having such an early start yesterday I’ve had a slower one today, getting some financial stuff sorted out and preparing for the next couple of day’s travels. Now I’m ready for the off and to make my way down to London for tonight’s George Bradshaw address. So, let’s see what happens today, shall we?

I’m heading to Halifax today and (unlike yesterday) there’s not a trace of mist. In fact, it’s a stunning day and I’m beginning to think I should have packed the suntan lotion!

I’m not joking about the suntan lotion! Today’s temperature’s ridiculous for February. It’s lovely and deeply worrying at the same time as climate change is real. I wonder how many records will be broken this year?

On my walk to the station I detoured through Halifax’s magnificent Piece Hall. The piazza was busy with people basking in the sun or snacking at one of the cafe’s. When you see the place it’s hard to accept you’re in West Yorkshire and not Italy.

Right now I’m on my first train if the day, the 11:59 to Leeds via Bradford. It’s being worked by a cascaded 2-car class 158 from Scotrail, so we have the luxury of capers and more tables than normal! 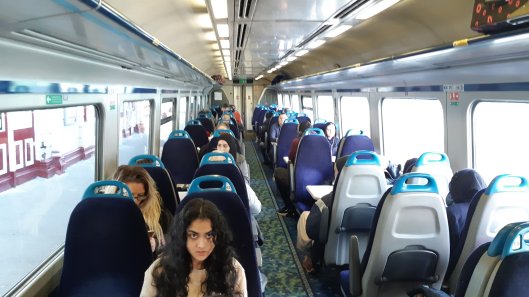 I didn’t hang around in Leeds, instead I caught LNER’s 12:45 to Kings Cross, which is being worked by one of their venerable HST sets. It’s a lightly loaded service, as you can see from this picture. 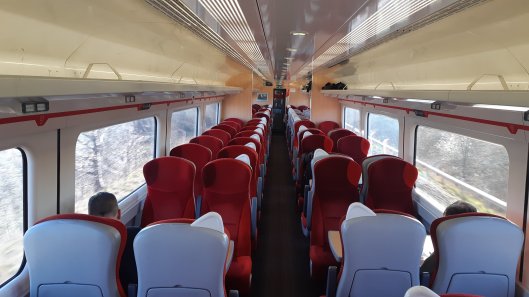 I’ve bagged a vacant table and set up the laptop to take advantage of the fact LNER have now made wifi access free to both 1st and Standard Class passengers, which is great!

I abandoned the HST at Doncaster as a couple of photo opportunities were presenting themselves. Firstly, one of the LNER ‘Azuma test runs was due through. These Hitachi built trains are due to enter passenger service in the next few months (although no-one, even DfT can say when exactly). At the same time, a pair of refurbished HST (High Speed Train) power cars were making their way from Brush, Loughborough to Scotland. Here’s a shot of the power cars. 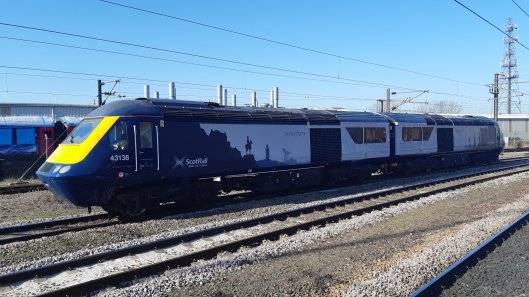 With the sun out, the railway enthusiasts were out in force, cameras and notebooks in hand. This station’s almost certainly the busiest when it comes to the number of enthusiasts. They’re attracted by the variety of passenger and freight trains that pass through and because the adjacent railway works can produce all sorts of strange and exotic vehicles for refurbishment or repair.

Trainspotting (which is the focus of many of the rail enthusiasts at Doncaster, although other flavours are available) reached its peak in the 1950s. After that it went into a gradual decline which was hastened by the end of steam trains on the national network in 1968. Of course, nowadays there’s such a variety of hobbies or sports available compared to the post-war years it’s no wonder few young people are attracted to the hobby. Add to this the fact ‘trainspotter’ has become an insult and you can understand the decline. That doesn’t mean some young people (make and female) don’t take up the hobby, but the throng at Doncaster displayed a common trait. They were all elderly (mostly retired) men. I reckon that if I went back in 10 years time the number would have thinned considerably simply due to the passage of time.

I’m now on another LNER HST heading South. This one’s rather different as the fact it still uses the original style seats betrays the set as one acquired from East Midlands Trains. I’ve never been a fan of the IC70 seats as their fixed armrests make it awkward to get in and out.

After a brief pause at the much enlarged Peterborough station I’m on the move again getting ever closer to London, this time aboard one of LNER’s MK4 coach sets being propelled by a class 91. I know many people thought GNER were the epitome of post privatisation operators but I have to say LNER have beaten them on many levels. There’s a far better passenger information system now with screens that give you realtime information. No more paper reservation labels either and the free wifi’s a boon.