As night follows day, the British media and Brexit supporters produced the all too predictable furore over Donald Tusk’s verbal (and Twitter) reality check yesterday. His comment, wondering what the special place in hell looks like for those who promoted Brexit, provoked squeals of outrage from many of those who are guilty of exactly that. Farage, Andrea Jenkyns, Grant Shapps and Andrea Leadsom being amongst them.

Leadsom went on the BBC to say Tusk has “no manners”, which is weapons grade hypocrisy when you consider the anti EU rhetoric that’s come out of the pro-Brexit camp these past few years. The EU has been compared to both Nazi Germany and the Soviet union by these clowns, whilst newspapers like the Mail have labelled remain supporters as ‘traitors’.

Tusk has hit a nerve because he’s telling the truth – as the whole sorry shambles demonstrates. They NEVER HAD A PLAN, just bombast, bluster and downright lies – and now the chickens are coming home to roost and the blame game’s in full swing.

Today, the next part of the shambles will play out in Brussels, as Teresa May goes (cap in hand) to ask the EU to dig her out of the mess she’s helped create – because she HAS NO PLAN. She threw her negotiated agreement with the EU under a bus and now wants the EU to rescue her. Her claim to have a ‘mandate’ from Parliament will cut no ice in Brussels as the EU leaders have a mandate and instructions of their own – and they have the upper hand. This is what ‘take back control’ looks like away from the Brexiteers bluster. We gave control away just as soon as we triggered article 50 and set the clock running without having a clue what we wanted (just what we didn’t). All we had were May’s ‘red lines’ which had doomed us to failure from the beginning.

So, what will happen in Brussels today? Nothing of any substance, because May hasn’t got a plan. Oh, the language may be more diplomatic, but the EU isn’t going to offer anything that gets the UK off the Brexit hook. Why should they? This epic disaster is of our own making, not theirs, and they have other fish to fry – looking after the interests of their member states – which includes Ireland. We squandered our stock of goodwill a long time ago, we’re running on empty now.

No doubt the media will be full of speculation and poring over an interpreting (or, in some cases, spinning) whatever is said. It’ll keep them busy for a while producing acres of copy and pointless pieces to camera. Meanwhile, the clock continues ticking in the background as the day of reckoning gets closer and closer. Next week there’s another vote in the House of Commons. No doubt this will be yet another sorry farce as a bunch of people completely incapable of facing reality and the consequences of their decisions drag out our national humiliation to its awful conclusion. The only question now is how long this farce will drag on. Will they continue to fiddle whilst Rome burns, or faced with the awful reality that’s staring them (and us) in the face, will they finally discover their backbones? I wish I could say I was optimistic. Instead, I’m off to stock up on tins of chickpeas…

I’ve stopped for a coffee and logged onto the news to find out exactly what we knew was going to happen. May got nowhere in Brussels. Despite the warm words in a joint communique which carried the classic old line about ‘robust but constructive’ discussions, Junker has made it crystal clear (yet again, how many times does the poor sod have to say it?) that the withdrawal agreement is NOT for renegotiation. Words may be tinkered with, but that’s it. Talk about a waste of time. Here’s a copy of the statement. 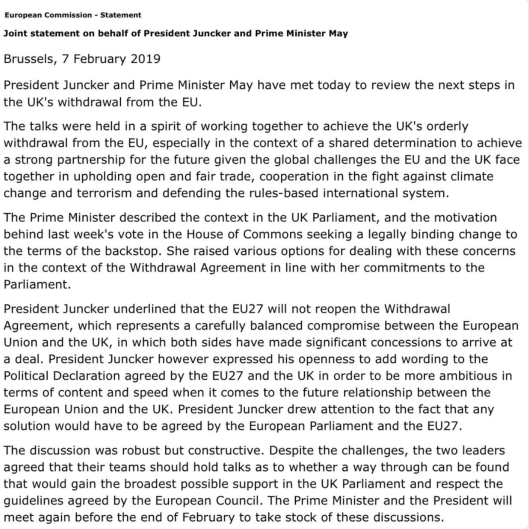 Note the line that ‘President Junker drew attention to the fact that any solution would have to be agreed by the EU Parliament & EU27’. Does that sound like us having taken back ‘control’ to you?

The only noises that can be heard now are the sounds of a clock ticking and a can being kicked down the road.