It’s our first Monday morning ‘back at work’ after returning from new Zealand – although that’s been more noticeable for Dawn than I as I’ve been busy editing pictures and catching up with people ever since I returned last Thursday. Even so, today feels like the start of a ‘proper’ working week – especially as Dawn’s not been around, so we’ve been separated for the first time for five weeks.

As the jet-lag didn’t hit me too badly and we had snow on the ground I’d planned to get back into the swing of things on Saturday. Railways in the snow make for some good pictures, but I’d forgotten one thing: the bloody Northern Rail Saturday strikes are still dragging on, so many of the lines near us either had no service or a skeleton on. This led to Dawn and I driving over to Diggle and the Colne Valley for a little while, but the snow didn’t really play ball as it was more on the valley tops in Yorkshire, leaving the railway clear – as this second picture shows. 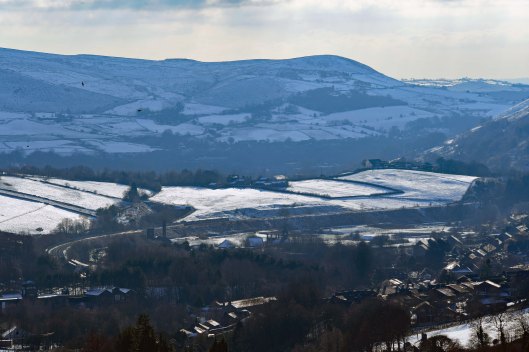 A pair of TPE Class 185s heads towards Diggle and the Standedge tunnel, ready to cross from Lancashire into West Yorkshire.

The snow never made it to the floor of the Colne Valley, as this view of a 185 between Marsden and Slaithwaite shows.

That said, the snow in adjacent Lancashire did make for some nice pictures. Here’s Denshaw, near Diggle. I admire the cyclist as this time last year I was training for my “ride India” charity cycle trip in aid of the Railway Children in not dissimilar conditions!

Today I’ve spent the day working from home, sorting out back catalogue pictures for the Rail Delivery Group as well as wading through emails and trying to catch up with some reading as well as paperwork – all the joys of freelance life. I shouldn’t really complain as I have tremendous freedoms compared to some people, and I love my job – but when you’re a one-man band there’s a lot to catch up with after a month away.

All being well I plan to be out on the rails within the next couple of days. Where I go depends on the weather as I wouldn’t mind one or two more snow pictures. That said, there’s an awful lot of new trains that are out on test at the moment, being prepared for the new timetable in May, so we shall see…