It’s time to shrug off the jet-lag and hit the ground running now that I’m back in the UK. First off is meeting up with friends and colleagues in Manchester to find out what I’ve missed over the past month and to sort out some projects for the coming months. Of course, there’s a social side to it too!

I’m currently on my first Northern Rail service of the year, the 11:06 off Sowerby Bridge to my old home town, Southport. It’s a good start as it’s on time and it’s made up of two refurbished units, a 150/156 combo. I’m travelling on the 156 as I much prefer them to the 150s, it’s good to see them becoming regular on the Calder Valley line again nowadays. 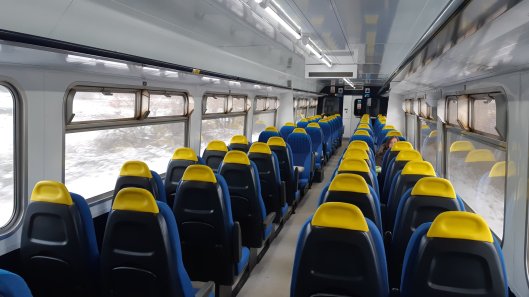 The walk down to Sowerby station wasn’t too bad, despite the fact there’s fresh snow on the ground. The weather’s turned milder so I don’t feel like a fish out of water after being used to New Zealand’s summer temperatures!

The dusting of snow we’ve got on the hills around us is thicker and lower as I’ve journeyed West, so this is also a valuable reduce trip as I need some snow pictures for a client. Hopefully the snow will hang around for a day or two.

We’re now on the Eastern outskirts of Manchester, where the snow’s thinner but still present and the weather brighter. After being used to an Island with less than 5 million inhabitants it feels rather odd being back in the far more populous UK.

People familiar with Manchester pubs might know where we are now…

After a very convivial afternoon I’m on a train back across the Pennines. To be honest – it’s bleeding freezing! Clear skies have seen the temperature plummet. Even this trains HVAC system’s struggling to cope…

A quick pit-stop at the Hogshead before I tackle the hill home. One thing I did miss in New Zealand was the one thing the UK is unique at – pubs. Nowhere else in the world comes close. It was one of the things UK expat (in New Zealand & elsewhere) always mention with a wistful expression.