After a very pleasant 24 hours exploring the Art Deco delights of Napier we’re on the move again. This time we’re taking the Intercity bus all the way to Wellington, our final North Island stop on this part of the trip. It’s a long-haul on a sold-out double-deck coach. That takes almost 6 hours. We’d have liked to have seen more of Napier and the adjacent town of Hastings (which also has some lovely buildings) but when you’ve only got a month…

The town has a lovely, laid back atmosphere which makes it a very pleasant place to while away a few hours, admiring the buildings, or just sitting outside one of the many cafes to watch the world go by. In February Napier hosts an Art Deco festival, which sounds delightful. With all the palm trees and wall to wall sunshine, the place reminds me more of California than Cleethorpes! The shops are more upmarket too. Dawn was impressed with the quality of the clothes shops and I noticed the organic grocery stores and music shops – not to mention the business dedicated to Art Deco memorabilia. The theme pervades to the town, but not in a tacky, commercial way, more in a celebration of the design. This manifests itself in carefully designed shop signs, or even displays of old wireless in some of the bars. Talking of bars, that’s one thing that’s missing – a proper brew pub! Instead, the town suffers the curse of the ‘plastic Paddy’Irish theme bar – although one of the main ones has closed down – leaving a site ripe for development in the way I’ve mentioned.

We’re well on the way to Palmerston North now, having passed through a series of small Kiwi towns en-route. As before, they feel more American than English, mostly because they’re resolutely low rise and many of the smaller building are constructed from timber. The scenery’s another matter. This is Scotland in all but name.

We’ve just had a half-hour break in Palmerston North, which would’ve been lovely if it wasn’t for the fact that it’s Sunday, so the place is closed! It’s a large town too, but the centre of town around the bus station’s deserted. We managed to find one cafe nearby for a quick drink and a loo stop, but it was all a bit rushed. Whilst we were sitting there I spotted this sign in the window, which was slightly disconcerting.

Heading on from Palmerston we followed highway 1 down the coast to Wellington. It was a lovely drive as the road hugs the coast before weaving & winding its way through the hills that surround Wellington. I’d forgotten just how rugged the landscape is around the city. The roads were remarkably quiet, despite it being the end of the summer holiday for many people.

On arrival at Wellington we were met by an old friend of Dawn’s. Although originally from Yorkshire, Helen has lived over here for many years.  The three of us had a lovely evening at Helen’s home, chatting whilst sharing  Shepherds pie over a glass of wine. The two hadn’t seen each other for 25 years, so I left them to do some catching up and retreated to do a spot of picture editing, so here’s another selection of shots from Napier. 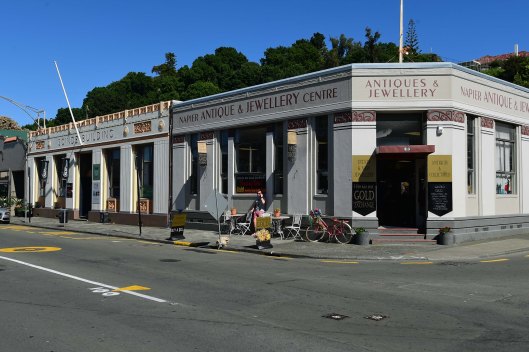 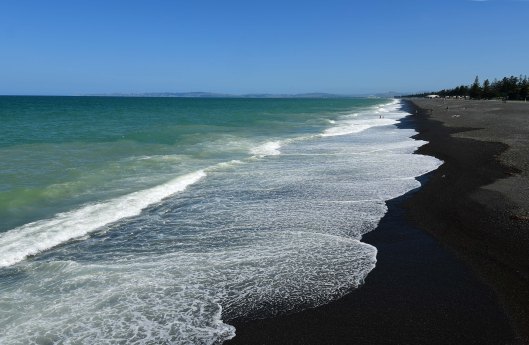 Napier’s main beach is dark shingle and the power of the sea makes it unsuitable for swimming by the inexperienced, but it is beautiful to walk along and watch.