Well, sort of. Today’s not a vintage one for Calder Valley timekeeping and all Westbound services from Sowerby Bridge are late. The frustrating thing is that there are no announcements and the information screens are next to useless as delayed trains simply drop off them! Here’s an example. There IS an 11.33 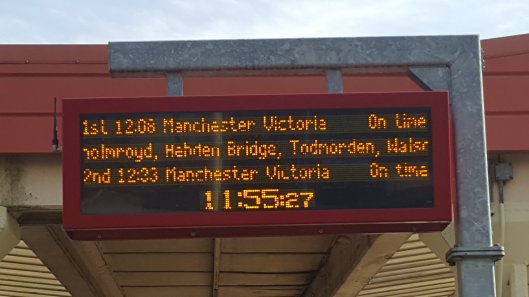 bu there’s no information on the 11.33 at all. As far as the system’s concerned it’s ceased to exist. Passengers have to use their mobile phone to try and find out what’s happening. The NRES (National Rail Enquiries) website showed that it’s running 30m late. Sure enough, an ex-Merseyrail Pacer hove into view at 12.03, allowing me to begin my delayed journey. It’s a busy service with the rear car rammed with prams and kids, so I’ve sought refuge in the front car.

Fortunately, I’ve given myself plenty of time to get to Crewe. Plus, the delay did have a silver lining as I managed to grab a nice shot of one of the local freight services which I’d have missed otherwise.

I’m now bouncing my way across the Pennines, I’ll add an update soon…

After a pleasant stroll across a very busy Manchester city centre I’m esconsed on a very different train to a Pacer as I’m aboard Arriva Trains Wales 13:30 from Manchester Piccadilly to Tenby, on the Pembrokeshire coast. It’s worked by an Alstom ‘Coradia’ class 175, a design many feel has one of the most comfortable passenger saloons of the post-privatisation era.

The trains have a mixture of airline seating and bays of 4 (some with tables, some not). I’ve plumped for a table so I can use the laptop. Sadly 175112 isn’t fitted with power sockets but it does have free wifi throughout. There’s also a trolley service selling food and drink which is useful on such a long trip as this.

Not that it affects me. I’m only on here till Crewe!

Well, that was an interesting day. The HSIRL report went well. There’s a lot of local interest in what Hs2 phase 2a means to the area. During our tour of the station we were given an insight into the ambititous plans there are for making Crewe a far more attractive and modern ‘gateway’ whilst restoring the listed parts of the station. I’ll blog about the report separately.

Right now I’m heading back to Manchester aboard one of Virgin’s Pendolinos. The sunny weather we had earlier has fled, letting rain take its place.

My brief stint in Manchester’s come to an end. The weather lived up to the city’s reputation, although I didn’t mind. Taking pictures in the rain can be really creative. The only problem was that – now the days are getting longer – I didn’t have time to hang around till it got dark.

As I walked between Piccadilly amd Victoria I couldn’t help but notice the number of teenage girls who were (how shall I say) not exactly dressed for the weather! It was only when I got to Victoria and saw them swarming around the entrance to the Arena that I twigged it’s because someone I’ve never heard of is gigging tonight.

The station was protected by a phalanx of British Transport Police, which was rather unfortunate for one dishevelled bloke on a bike who was clearly in the wrong place at the wrong time. The moral of the story? Don’t try and kick-off with half a dozen BTP officers as there will only be one winner…

My final steed of the day was one of Northern’s refurbished Class 158s. They’re not bad units and the refurb has improved them by adding PIS screens, but they are a bit of a dead end now. It would be lovely to have power sockets and wifi but I doubt the engines would stand the extra load.

Roll on our new trains!

It seems the weather’s indifferent to the colour of your rose. Red or white makes no difference. What a change to this morning…