As promised earlier, here’s a look at the mock up of the interior of Greater Anglia’s Aventra trains. Be aware that this isn’t exactly how they’ll appear In service (it is a mock-up after all). The model has been built to test various layouts, so it’s an amalgam of styles. Still it give you a feel for what they’ll look like in service.

Features to note include underfloor heating, air conditioning, plug sockets (with USB) and high capacity broadband. The units will be used across the GA network, including Hertford East, Kings Lynn and Ipswich to London. Also GE services including Norwich, Ipswich, Braintree, Clacton and Southend.

The first trains will enter service in 2019.

The seats are cantilevered from the body sides, creating more luggage apace and making them easier to keep clean. Note that each bay has more USB sockets than seats. 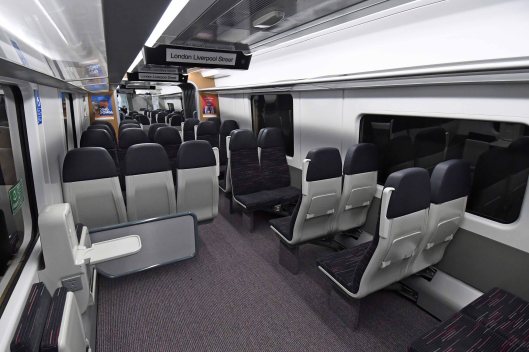