Here’s a quick blog to apologise (yet again) for the recent lack of blogs. As I’ve mentioned previously, priority has gone to begin the time consuming process of scanning thousands of my old slides. You can see the fruits of my labour here. So far I’ve added several hundred – both rail and travel. You can take your pick from Greece, Tanzania & Zanzibar, Denmark, the UK or Brazil. Of course I’m still adding contemporary UK rail images (such as the launch of the two new rail franchises covering the North of England) plus various other bits and bobs. I’m typing this from a pub on the banks of the Thames in Oxfordshire which has led to Sunday’s picture of the day &  local history lesson as this is the view from the pub! 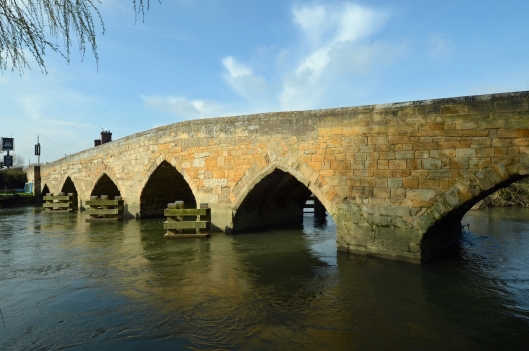 The ‘new’ bridge was built in the 14th century by monks on the order of Kings John. It was constructed in order to improve communications between the wool towns of the Cotswolds and Southern England. The bridge originally had 51 arches. Only 12 remain. It’s the 2nd oldest surviving bridge to cross the Thames.

I’ll be adding many more pictures (old and new) to my website over April, so feel free to drop in and take a look. Hopefully I’ll get time for some more blogging too…

3 thoughts on “Tales from the Thames…”