Last Thursday the House of Commons Hs2 Hybrid Bill Committee heard its last petition. At the close of events, Mr Strachan, one of Hs2 Ltd’s QC’s made this statement, which put the process into context; 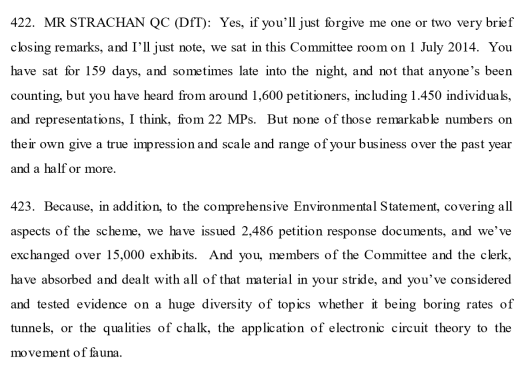 Yet, for all these remarkable numbers, the process ended with a whimper as the last two surviving anti Hs2 groups (Hs2aa and Stophs2) failed to make any impact with their final petitions.

Part of Hs2aa’s final ask was that Hs2 should have a 300kph speed limit imposed upon it. To justify this they used an ‘expert’ witness. Sadly for them this expert managed to make a fundamental error in his argument, asserting that existing high speed trains used in Germany, France & Japan all had top speeds of 300kph. Here’s a slide from his presentation.

The reality is very different. The Siemens Velaro E has a top speed of 350kph and the version used by Eurostar (the e320) will run at 320kph – the same as the Velaro D in Germany. Here’s a look at the Velaro family.

Alstom TGVs operate at between 300-320kph whilst the newer AGVs run at speeds up to 360kph.

The Japanese high speed fleets also operate at 320kph with the newer N700 capable of 330kph.

Oh, and that still leaves the Bombardier ETR 500 Frecciarossa (max speed 360kph) and the Spanish Talgo T350 (350kph). So, as you can see, the 300kph claim by Hs2aa’s “expert” is misleading nonsense. You can read about Europe’s top 10 high speed trains here.

Needless to say, Hs2aa’s QC had a hard time trying to sell these claims. You can watch the days proceedings here.

The final days hearings on Thursday weren’t any better. Joe Rukin presented StopHs2’s final comments and asks which were so poor that Hs2 Ltd’s QC didn’t even need to reply, pointing out that everything Rukin raised had been said before, so there was no point in wasting the Committee’s time responding!

Petitions done and dusted, the Committee have retired to compile their final report and recommendations, which may be available before the end of February. Expect the Committee to put the final nail in the coffin for antis claims that Hs2 should terminate at Old Oak Common not Euston as well as the idea that Hs2 should be tunnelled all the way under the Chilterns.

This leaves the anti Hs2 campaign with nothing else to do until the House of Lords petitioning process starts later in the year. This is a big problem for them as they’ve no way to keep their campaign going. It’s been losing momentum ever since the Hybrid Bill passed 2nd reading with such a stonking majority. There’s been nothing but bad news for them ever since and the lack of anything happening outside of social media means that many people have given up on the anti campaign.

To add to their woes the social media campaign’s floundering, badly. There’s hardly any activity from either of the two groups. Hs2aa have only tweeted 4 times in 2016. Their website’s been updated 6 times but most of that is the ‘news’ about their appearance at the Committee! Their Facebook page is equally bereft of real news, most of what appears is their tweets about “empty” trains!

StopHs2 are in just as poor a position. They’ve nothing going on so they’re reduced to recycling old stories. Their Facebook page is a joy to behold. The few people commenting (always the same few names) can’t understand why they’ve failed to stophs2 – although the nature of their remarks makes it obvious to outsiders! Twitter isn’t much better. They’re so bereft of ideas they’re now trying to get the Cubbington pear tree top of an EU vote, so they’ve been posting this in several languages; 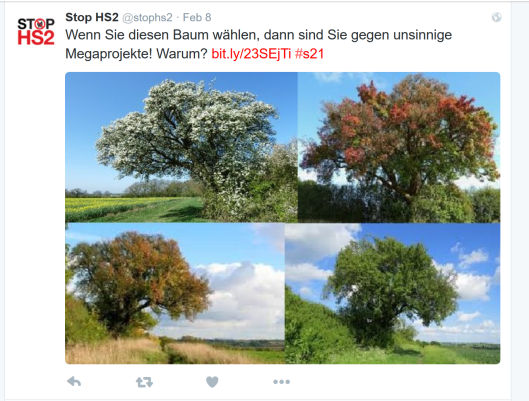 Quite how voting for a tree is meant to stop hs2 is a mystery, but I suppose they’ve got to keep the bloke bankrolling them thinking they’re still doing something!

In truth, the whole stophs2 Twitter campaign is becoming an embarrassment. Now that most sensible people have abandoned them the lunatics have taken over the asylum. It’s as mad as a box of frogs! Here’s a few examples from today.

Is it any wonder sensible folks have given up on the anti Hs2 campaign when this is what it’s sunk to? How is this vacuous nonsense meant to persuade intelligent folk to support them? All it does is expose the fact their campaign’s a shambles.

I wonder how many more folks will desert it in the next few weeks before the Lords take up the reins & continue the progress of the Hs2 Bill into law?

3 thoughts on “The petitions process ends, not with a bang – but a whimper…”