For years the StopHs2 campaign has pretended that it’s not really just a bunch of nimbys who live along the route, it’s really a national campaign of concerned citizens (-honest, guv). We’ve been expected to turn a blind eye to the fact that there’s not a single StopHs2 “action” group anywhere – except for those on the route.

It was never going to wash and now the Stophs2 campaign’s latest attempt at a petition has provided the evidence in cold, hard numbers.

The poll in question wants to see the Hs2 budget diverted to flood defences. Now, you might expect the people who are calling for this to be living in flood affected areas. Not a bit of it. The beauty of the new Government petitions page is that it supplies a map of all the UK parliamentary constituencies with the individual petition scores for each one.

Here’s a copy of the results along the Hs2 route from London to just South of Birmingham. 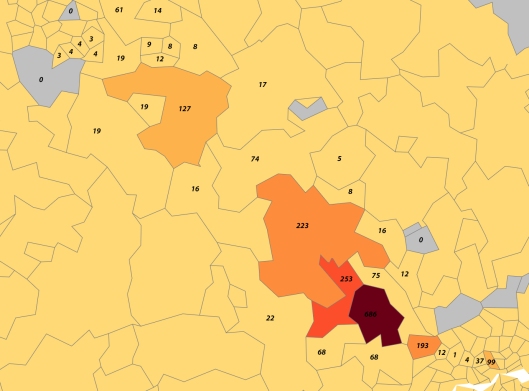 Isn’t it a remarkable co-incidence that the folks who most want to see Hs2 money spent on flood barriers live on the Hs2 route and away from any flooding?

Here’s another map, this time covering the flood hit areas of Lancashire and Yorkshire.

The two areas with the highest number of signatories just ‘happen’ to be on the Hs2 route. In contrast, the Calderdale constituency (one of the most badly hit by floods) has flooded the petition with a massive 3 votes…

I predicted that this petition would backfire on Hs2 anti’s as it would expose how little support they had. In fact, it’s done more by exposing that the Chilterns are by far the biggest group in the Stophs2 campaign, dwarfing all others. It’s also revealed that some of the Phase 2 anti Hs2 groups are far, far weaker in comparison. Much of the phase 2 route doesn’t even show up as the number signing the petition are no greater than the surrounding areas!

Here’s an updated map showing the position now their petition has hit 6165 signatures (with their average dropping by the day now).

Here’s another chart that puts those 6165 votes into perspective. 2888 come from a mere 16 out of 650 constituencies, and guess what – they’re all on the Hs2 route! 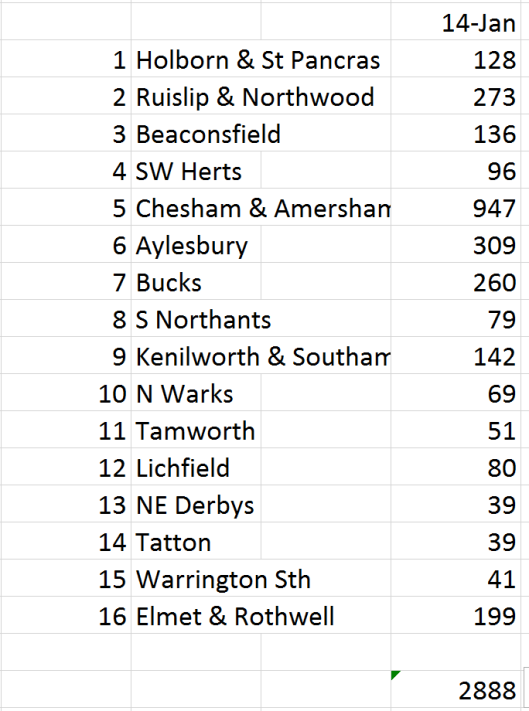 So, 46.85% of the entire votes cast come from those 16 constituencies! If you added all the others that Hs2 touches what’s the bet that the figure will be way over half? There is another interesting tale the petition tells too – which is how weak the Stophs2 campaign is away from the Chilterns & Phase 1. Look at the numbers in areas like Staffordshire or Mid Cheshire, they’re tiny.

This is why the flood defences vs Hs2 petition does nothing but shoot the anti Hs2 campaign in the foot. The numbers don’t lie – even if they do…

Now that this petition is clearly failing (the past week has seen signatures down into double figures with the running total standing at 6848) I thought it would be interesting to update the phase 1 map. 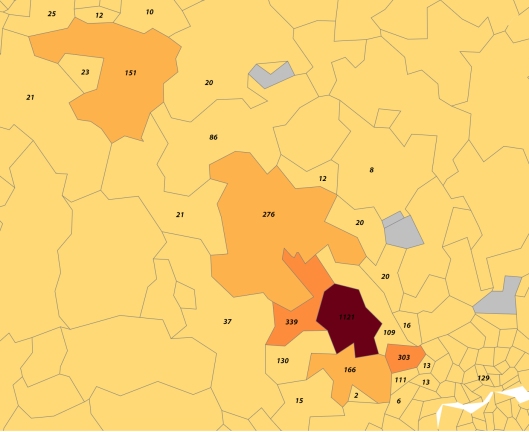 This shows that most of the votes are still centred on the Hs2 route. Only one constituency out of 650 has more than 1000 signatures. It’s that one well known for flooding. err – Amersham & Chesham? The proof that the core of the Stophs2 campaign is Chiltern Nimby based is incontrovertible and it’s been supplied by the Stophs2 campaign itself – as has the evidence of how weak they are on phase 2 of Hs2. Remember these numbers have been reached after the stophs2 campaign (and its individual supporters) have been frantically puffing the petition across all their websites & social media outlets – yet this is the best they can do…

I thought it would be interesting to have another quick crunch of the numbers on this petition, so here they are. The total now stands at 7445 votes – a miserable failure. The petition itself is of no interest – but who signed from where is. 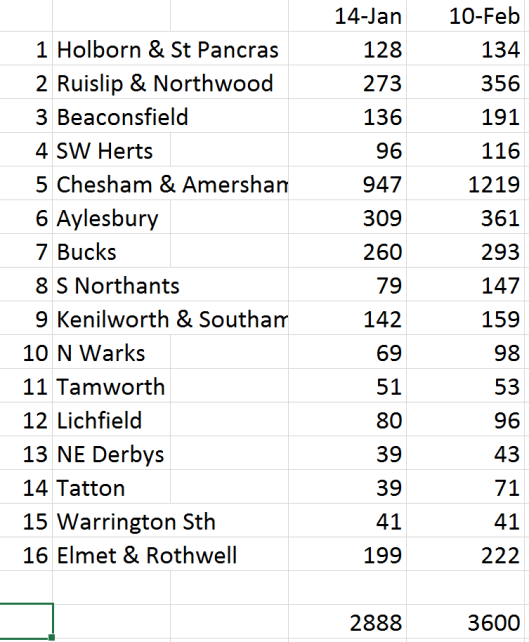 This blows apart various anti hs2 claims. One is that they’re a national campaign – it’s clear the vast majority of their support is not only route based but is concentrated on the Phase 1 route in the Chilterns. The other observation is that the anti Hs2 campaign has very little support along the phase 2 routes to Manchester & Leeds. These figures make depressing reading for antis as they show that once Phase 1 goes ahead, the anti Hs2 campaign will collapse as the two campaigning groups (Stophs2 & Hs2aa) are run  by (and mostly funded from) phase 1 residents.