On the 26th March the Hs2 Petitioning Bill Committee published its first interim report which contained a series of requests & observations generated by the petitioning process. You can find their report here.

Yesterday Hs2 Ltd published their response, which you can read here.

Both make interesting as they give an insight into the issues raised & the vast amount of detailed work that’s gone into progress so far. One thing in particular caught my eye, which was these comments regarding ‘template’ petitions; 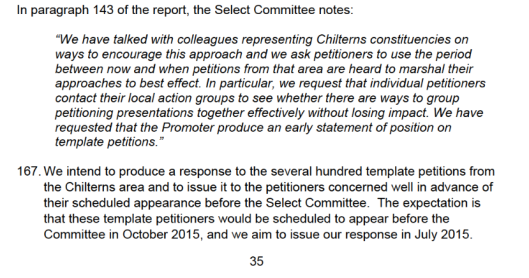 Cut & paste petitions were a centrepiece of the anti Hs2 mobs tactics. They hoped that, if they swamped the Committee with petitions they could bog down the whole process & delay Hs2 long enough that a new Government would decide to cancel the project due to delays & costs. Like all the other anti Hs2 tactics, it’s failed. The Petitioning Committee have made it clear they aren’t going to let themselves get bogged down this way & neither are Hs2 Ltd.

Another interesting aspect of the Petitioning Committee’s report is that they are looking to make recommendations on the conduct & process of future Hybrid Bills (such as the Phase 2 bill). What’s the bet that one of those recommendations will be to close the loophole of ‘template’ petitions & prevent the threat of future bills getting bogged down in this fashion?