I said that as the project progressed I’d do regular updates on what’s happening, so here’s the first one.

Since my last blog there’s been several things of note on the construction, design and contract fronts.

At the beginning of the month it was announced that Sheffield based firm 3Squared had won a three-year contract to supply its RailSmart software, alongside some bespoke modules, to form a supply chain management system, giving visibility of the complex freight supply chain, and providing live performance, cost management information and operational control data in real-time. This is yet another example of SME’s across the UK gaining work form HS2. You can read more here.

HS2’s also busy on the archeological front, with important (and also one rather gruesome) discoveries made at Wellwick Farm, Bucks. Archaeologists discovered a skeleton of an adult male buried face down in a ditch with hands bound together under his pelvis. The unusual burial position suggests the iron age man may have been a victim of a murder or execution. Osteologists are currently examining the skeleton for further evidence of foul play. A large ceremonial timber circle was also discovered, along with other burials. More here.

On the 21st July Hs2 released this excellent new video in conjunction with the Cappagh Group showing the benefits of railfreight and how HS2 will free up capacity for more freight services, helping reduce UK transport carbon emissions.

More about the video can be found here.

On the 23rd HS2 released pictures of the final design for the Chalfont St Peter vent shaft headhouse.

Set back from the road, the single-story building will be wrapped in a simple grey zinc roof with doors and vent openings picked out in a dark bronze colour to provide contrast.

Taking its inspiration from the style of local barns and other agricultural buildings, the headhouse is designed to fit into the surrounding landscape. The pre-weathered grey zinc roof will age naturally over time, without loss of robustness or quality, while the whole structure will sit on a simple dark blue brick base.

Below ground level, a 60 metre ventilation shaft will reach down to the twin tunnels below, with fans and other equipment designed to regulate air quality and temperature in the tunnels, remove smoke in the event of a fire and provide access for the emergency services. More here.

What you wouldn’t know is what lies beneath… 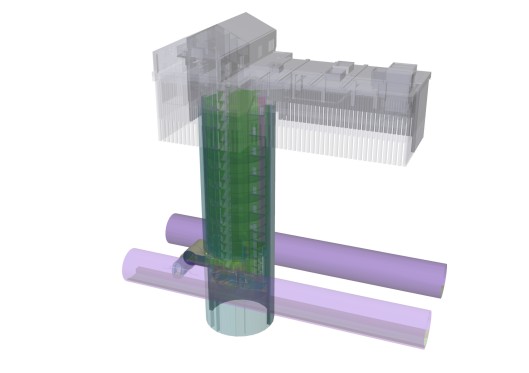 There’s also this excellent video on the size and complexity of the work on the M42 at Solihull.

The environmental side of the project has been busy too. The next day HS2 published details of a project which uses drone technology to aid ecologists monitoring the Skylark bird population.

Roadbridge, a sub-contractor to Align JV – the main works civils contractor that is delivering the portion of HS2 that includes the Chiltern Tunnel, has begun using the drones during its extensive environmental mitigation programme on the tunnel South Portal site next to the M25 in Buckinghamshire.

Monitoring nesting bird populations is crucial, providing accurate information which results in more effective ecological mitigation to protect the natural environment around work sites. At twelve metres above ground level the drone captures approximately a 9m2 area, providing a reduction in search times, and a clear perspective from a 90-degree view of the ground below. Using a thermal camera, the drone can calibrate to the ground temperature and other objects to lock onto a heat source and identify the bird nests. This includes birds on the nest, eggs on the nest and birds sheltering on the ground. More here.

So, another busy month for HS2 – and that’s without the continued work on construction sites along the length of the route.

And what of the protests against HS2? To say they’ve had little success would be an understatement. There are only half a dozen protest camps along the route and many of them are moribund, seeing little real protest activity or ‘direct action’. One (Crackley) is almost redundant now as the vast majority of vegetation clearance has been completed. There was an attempt to stop some work along the A413 at Great Missenden, but this was an abject failure and the protesters have now moved on as the work’s been completed. The major protest has been at the Denham site where National Grid are removing and re-siting electricity pylons and part of the work to divert services away from the HS2 route.

The focus of the protests over this past week have been a solitary Alder tree, which the protesters claimed was ‘ancient’. As the week went on it aged rapidly as their claims became more and more fantastical. In the space of a few days this one tree went from 400 years to 800 years old! There’s only one problem. These claims were utter cobblers! The thing about the protesters is that very few of them actually know anything about the environment they’re supposedly protecting. If they did, they’d know that ‘ancient Alder’ is an oxymoron. The average life of the species is 60 years – as their ‘friends’ at the Woodland Trust point out on their website!

Adding an extra zero to the trees age did them little good. Nor did the increasingly ridiculous claims on social media from the protesters, who were vastly outnumbered by HS2 staff, the National Eviction Team and both the Metropolitan and Thames Valley Police. Allegations against the police and HS2 ranged from the usual ‘ecocide’, ‘illegal’ arrests and reached new heights of absurdity with claims of sexual assault.

The whole sorry circus came to an end last night when the *cough* ‘ancient alder’ was finally felled after a day of to-ing and fro-ing between police, NET and the protesters which saw several arrests and a couple of protesters who were up on ropes across a chalk stream falling off and injuring themselves.

The irony? These environmental ‘protectors’ had spent several days charging back and forth across a chalk stream, supposedly one of the things they were meant to care about. How much damage they did to it during their confrontation is an interesting question.

Needless to say, the bluster from the protesters at the end was hilarious. Here’s what ‘Hs2Rebellion’ had to say!

Actually, the Hs2 rebellion Facebook page is good for one thing – their videos often inadvertently give the game away of just how preposterous their claims are. You can find it here.

Talking of preposterous, my last ‘Crazy anti Hs2 campaigner of the week’ (William) who I featured here has been at it again. The man’s a fantasist who needs to carry a fire extinguisher at all times as his pants are permanently ablaze. This one from today amused me.

The idea that a serial liar is in any position to lecture others about ‘fair and balanced reporting’ is delicious! I take it he’s rather upset that the Guardian are ignoring his fantasies. But Murdoch? Really? I’m assuming our friend from across the pond is unaware that the Guardian is actually owned by the Scott Trust and is completely independent!

Somehow, despite all the bombast, bluster and lies, I doubt we’ll be seeing Hs2rebellion achieving anything at all. The number of protesters who’ve been arrested, injuncted or who are due to be sentenced soon grows, as does their failure to achieve anything at all. Meanwhile, HS2 is ramping up work across the whole of the phase 1 route.

I’ve a favour to ask…
If you enjoy reading this blog, please click on an advert or two. You don’t have to buy anything you don’t want to of course (although if you did find something that tickled your fancy would be fab!), but the revenue from them helps to cover some of the cost of maintaining this site – and right now (because of Covid), us locked-down freelances need all the help that we can get…