Yes, it’s back! Despite the fact the campaign against Hs2 has been as pointless as giving away condoms in a convent and most of the old guard of Nimbys and other locals have bowed to the inevitable now its obvious HS2’s being built we’ve had members of Extinction Rebellion move in to provide some comedy gold.

Extinction Rebellion have left a very large hostage to fortune with their slogan ‘Tell the truth”. Here’s an example, with serial porkie teller Chris Packham (exposed in this blog for having pants on fire) holding up their slogan here.

Of course, such a slogan is hypocritical is the extreme as XR members have lied through their teeth about HS2 ever since they became involved. Here’s one classic example. Step forward ‘William’, a American in the UK who calls himself ‘Boots on the ground News’ on Twitter.

Rather laughably, William claims that “The truth always surfaces” as part of his bio. Well, yes. It often does. But not in the way he meant…

You see, the man is just another of those odd fantasists who’re often drawn to groups like Extinction Rebellion and the campaign against HS2. We’ve seen them in action for years and I’ve documented many of them and their tenuous relationship with reality (and facts) over the years.

Here’s just a few of his recent howlers.

Eh? I’m sure I’m not alone in reading this and thinking – ‘hang on, I remember the summer of 1976 and standpipes and water bowsers in the streets – I’ve not seen or heard a dicky-bird about any anywhere in 2020’? Of course, in my neck of the woods (West Yorkshire) I’ve also seen a lot of nearly full reservoirs over the weekend, and earlier in the year I remember the damage caused to my local town. Not by drought – but by floods!

Oh, the UK metrological office would care to differ too. Here’s a couple of quotes.

“This winter (December, January, February) has been the 5th wettest winter on record (data back to 1862) for the UK as a whole as well as the 5th mildest.”

“Is this due to Climate Change?

Met Office records show there is a recent trend of increasing rainfall on seasonal and annual timescales. Since 1998, we have seen six of the ten wettest years on record. However, rainfall patterns in the UK have always shown a large range of natural variation, which makes it more difficult to unambiguously identify long term trends linked to climate change. However, wetter winters have been observed and is consistent with what we expect to happen in the future with continued climate change.” You can find the rest of what the Met Office has to say here. And Spring? The pictures far more mixed, and more complex.

And what of June? The Met office reports that “Rainfall was 144% of average”! I’m sure those people across the country who were caught up in June rainstorms and flash floods will be as surprised as me to know it never happened! So, the assertion that this is ‘greatest drought the UK has ever seen’? Utter bollocks. The man must have been been getting his weather advice from the Daily Express!

Then there’s these recent classics. It seems that teenage ‘tree protectors’ have the uncanny ability to travel through time and space, allowing them to be in two places simultaneously. Take a look.

On the 18th young ‘Windfall’ lives up a tree in Crackley woods eh? Hang on a minute, on the same day she’s supposedly up a tree in Cubbington woods!

Clearly, it was such a rush to get between the two sites (they are over 6 miles apart) she never had time to change her red top! 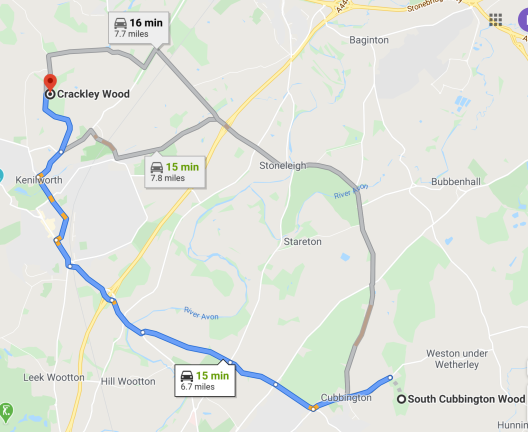 I could go on (and on) but as his twitter feed is so full of twaddle, lies and scaremongering I’d be here all night. The fact these people are now the backbone of the ‘campaign’ against HS2 should tell you all you need to know.

Sadly, the UK ‘green’ movement seems to be full of clowns like this. Whilst their European counterparts are helping to cut Co2 emissions by encouraging the modal shift from air/road to rail to tackle climate change, these muppets are trying to sabotage building the rail capacity we need to be able to follow their lead. The good thing is they’re so bloody useless they’ve not stopped a thing!  My only concerns are twofold. The damage they’re doing to the reputation to the wider green movement, and the facts they’re filling the heads of young people like these misguided but well-meaning protesters with lies. They deserve better.

“Tell the truth”? The immortal words of ‘Jim Royle’ spring to mind…

It would be good to see more people challenge the likes of @bearwitness2019 over the crap they fill impressionable young minds with. Feel free…

I’ve a favour to ask…
If you enjoy reading this blog, please click on an advert or two. You don’t have to buy anything you don’t want to of course (although if you did find something that tickled your fancy would be fab!), but the revenue from them helps to cover some of the cost of maintaining this site – and right now (because of Covid), us locked-down freelances need all the help that we can get…