I’ve not had time to blog for the past few days as I’ve been busy wading through entries in the ‘It’s your station’ category for the annual Community Rail Awards. I have to say, there’s some excellent entries and the standards are high. It’s also great to see that groups haven’t let the fact they’ve not been allowed near stations to dent their spirit or work with the wider community.

I’ve also been busy with something new. My first listings on ebay have borne fruit so I’ve been learning the ins and outs of online selling and posting out dozens of old slides and railway memorabilia to the winning bidders.  Here’s a sample of what’s still available. I’ve hundreds more old slides to list as well as all sorts of ephemera from the post-privatisation era.

With the way the weather’s been it’s been a good time to be stuck at home, as this shot from one of my daily perambulations shows.

I do love the Pennine skies. You never quite know what to expect and they’re constantly changing. Talking of changing, it seems the Government has finally twigged that their ‘stay off public transport’ message has been crippling the railways. Passenger levels are around 16% of normal, whilst car use is almost back to normal and road freight has surpassed norms.

This means that I’ll soon be returning to the rails. Although many events in my diary have been cancelled I have a backlog of jobs to do. 2020 is also the year for my bi-annual trips around the network for RAIL magazine. We’re currently working out when that’s going to be scheduled and where I’m going to go. The trip will certainly be different this year!

In the meantime I’ve a trio of articles to write in the next week as well as finishing the first sift of station judging. It’s going to be a busy time! Hopefully I’ll be able to catch up with some blogging too!

OK, enough of words, lets move on to the picture of the day, which was taken at the Orang-Utan sanctuary at Bukit Lawang, Sumatra in 1998. 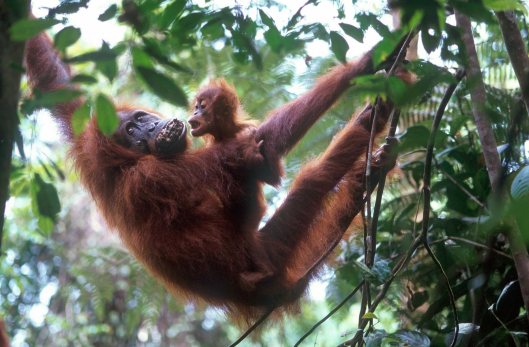 I was lucky enough to catch this shot of female and her baby out in the jungle. Nowadays, in the digital era, such a shot would be easy as you’d just ramp up the ISO. This was taken on 100asa slide film which was a hell of a challenge!