The farce that is British politics shows no sign of allowing reality to intrude at the moment, despite it knocking at the door – and shouting through the letterbox. The band of Brexiters are tying themselves in knots to justify both Brexit, and themselves. One of the maddest statements came from a supposed Labour MP, Kate Hoey, who said in a Parliamentary debate that “I don’t call it a no deal, it’s not a no deal, It’s a different type of deal”. Presumably in the same way that being dead is a different type of living…

This is the level of batshit crazy we’ve come to expect from the rabid Brexiters, for whom no mental gymnastics are out of bounds in their efforts excuse the complete and utter shambles they’ve helped visit upon us.

Away from the craziness, I’ve been busy editing pictures at home. First up were some more old slides, such as this, taken at Clapham Junction in June 1997. Nothing in the picture remains today. The old Kensington sidings that 33026 is using to run round an engineers train have vanished under a new platform for London Overground services. 33026 survived until 2003 when it was cut up at Eastleigh, having been withdrawn in August 1998, just over a year after this picture was taken. 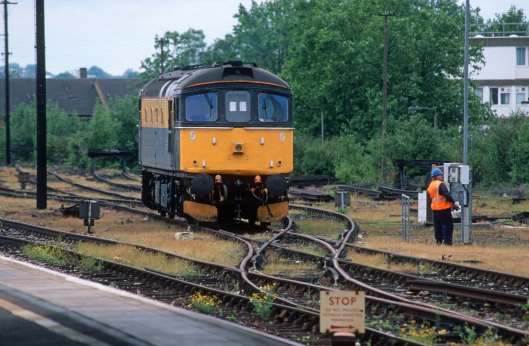 As well as scanning more old rail slides I’ve started on pictures from the anti Brexit rally in London on Saturday. You can find those pictures in this gallery.

This evening has had more of a domestic focus. Dawn’s accelerating her training for the Huddersfield half-marathon, so I’ve been stepping up to the plate on the cooking front and trying some different recipes from a new ‘Hairy Bikers’ cook book. The prawns I cooked tonight have seemed to go down well anyway. Here’s the basic ingredients all ready for cooking.

This is what the prawn curry looks like when it’s ready. No, those aren’t green chillies you see, they’re sugar snap peas, which give the curry a delightful crunchiness.