Today, Teresa May will (in front of the whole world, which is both agog and quietly laughing to itself), stick lipstick on her pig of a EU withdrawal agreement and try and sell it to Parliament, despite them having resoundingly rejected it only a few weeks earlier.

The lipstick is her claim that she’s secured ‘legally binding’ changes to it regarding the backstop. Anyone with half a brain can see this is nonsense, but such is the level of delusion in our politicians – and sections of the media, some will swallow it. Those in the  legal profession, such as the blogger David Allan Green haven’t. As he’s pointed out. 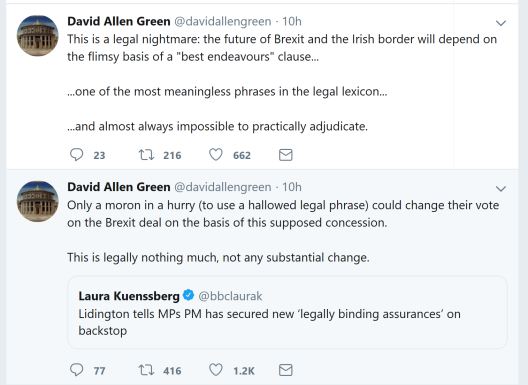 Will MPs fall for it? Who knows? It’s a farce that the whole of the UK and the rest of the EU is caught up in because our politicians have neither the guts nor brains to put a stop to it and say ‘this is madness’.

The Attorney General has published his legal advice to the Government, which piles on Teresa May’s agony.

There is no ‘legally binding’ new agreement, that bollocks has been exposed. So, what now for May’s deal?

So, there we go. May’s ‘deal’ is dead. It was rejected in a vote by 391 to 242, that’s a majority of 149. There was a dull inevitability about this, the only question was how many votes would go against her. Now the farce continues tomorrow, with Parliament voting on a motion that could see ‘no deal’ finally taken off the table. It was always an empty threat that frightened no-one in the EU as they were always far more prepared for the consequences than we were as their politicians weren’t living in cloud-cuckoo land over what the consequences of such a step would be. Many of ours never were – and still aren’t.

What next? Despite the complete absence of a backbone in many MPs nowadays I really can’t see them voting for us to leave without a deal. They may be weak, they may be deluded, but the instinct for self-preservation and the knowledge that history would excoriate them must be felt in their bones.

It now looks like the can will continue to be kicked down the road, with the UK having to ask the EU for an extension of article 50. All the Brexiters claims of us ‘holding all the cards’ and having ‘taken back control’ are exposed for what they were. Lies. It’s up to the EU to decide if they will give us that extension. In theory, they could refuse. They could say, ‘Nah, we’re so sick of your childish political games and arrogance that it’s time you faced the consequences of your actions, so screw you’. They won’t of course, but as the ball’s in their court they can set the time limit on the extension. But, what if they did refuse to extend the time limit, and the UK’s MPs have voted that we can’t leave with no deal. What then?

Of course, there’s one huge problem with this scenario. That clock’s still ticking, as Jolyon Maugham QC has pointed out via Twitter.

For those of you who don’t know Jolyon, he’s a QC who’s been at the centre of some very interesting court cases around Brexit. We are not out of the Brexit woods yet. There is one delicious irony in all this. It could be the Brexit extremists in the ERG who (by rejecting May’s deal) might have just killed off any chance of Brexit.