In the long list of failure of the anti Hs2 campaign, doomed petitions come close to the top. Time and time again they’ve started ones on the Governments petitions website, only too see it fall far short of the total needed. They’re a complete waste of time anyway as – in the unlikely event they reached the magic 100,001- all they’d do is secure a debate on Hs2 in the House of Commons. Note I said a debate, there’s no vote. Quite what antis hope to achieve is a mystery, but a new one’s been launched. Well, when I say a ‘new’ one, it’s actually been running for several months! To say it’s been under everyone’s radar is an understatement, but all of a sudden a few antis have decided it’s worth pushing via Twitter! Here’s a link to it. Poor John Duggan is one of the people desperately trying to puff it. 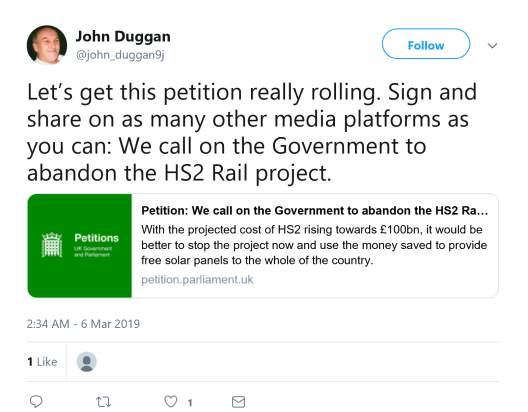 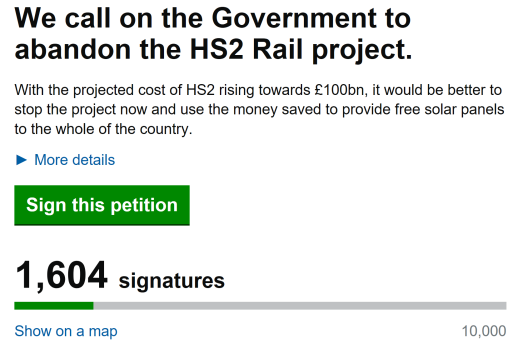 Problem is, to be anywhere near in with a chance it needed to average 555 signatures a day! It closes on the 24th April, in 50 days time. Sooo, that’s needing an average of 1968 signatures a day. Far, far more than it’s had in the last 130 days and every day it falls sort of that, the average goes up. You don’t have to be a rocket scientist to see the problem here. I can’t even be bothered to crunch any other numbers on this as it’s so hopeless. I’ll wait until it reaches the end next month.

Why Hs2 antis persist with these polls is a mystery. The only thing I can think of is that some of them have fallen for their own spin and bluster and genuinely believe there’s mass opposition to Hs2. They’ve never twigged that when people answer (often loaded) questions in opinion polls it’s pretty meaningless. It doesn’t mean they’ll actually act on anything, and it certainly won’t mean they’ll change their voting intentions for an issue that never comes anywhere near the rankings of things people consider important in elections.

Still, it keeps them happy, and gives me more ammunition to show what a hopeless campaign the anti Hs2 effort is!

I’ve a favour to ask.
If you enjoy reading these blogs, please consider clicking on an advert – or two! You don’t have to buy anything, honest! The clicks just help me cover the cost of running this blog. Many thanks, Paul