I’ve had an uncomplicated Saturday at home, far away from railways – unless you count scanning old slides. The fantastic sunshine we had earlier in the week seems like a memory as we’re back to the dull and wet weather that’s far more typical for this time of the year.

Dawn’s been out running as she’s training for the Huddersfield half-marathon which she agreed to do in a moment of madness via her work. I’ve been pottering around at home editing pictures and keeping a wary eye on the madness in the world through social media. We did take a break from all this by popping out to our local pub, the Big 6, earlier this evening for a chat and time with friends but this is very much a quiet Saturday night at home.

The old railway slides I’ve been scanning date from the summer of 1996 when the railways looked very different. Privatisation was very much a new thing. Many passenger sectors had yet to be privatised, but even those that had didn’t always show a great change, as this picture shows. This is London Kings Cross on the 17th September 1996. 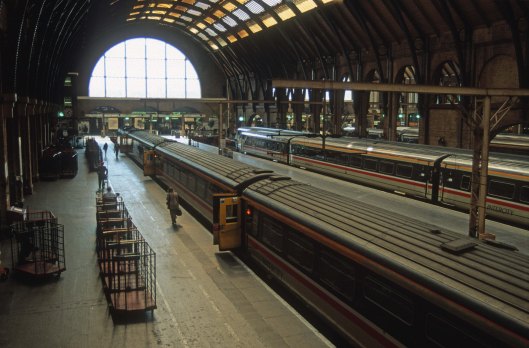 GNER had taken over operation of all the intercity services in April of that year. Not that you’d know as all the trains still carried their old BR liveries, whilst platform 1 to the right is still lined with the old BRUTE’s (British Railways Universal Trolley Equipment) used for carrying goods to/from postal and parcels trains.

Meanwhile, over on the West Coast Main Line Inter-city passenger services were still operated by BR (Virgin wouldn’t win the franchise until 1997). Here’s a shot taken at Warrington Bank Quay on the 18th August 1996. The 11:30 to Euston was a failure and had to be assisted by EW&S freight locomotive 56070.  Sadly, I’ve no record of how far the Class 56 worked the train, although I doubt it was any further than Crewe. 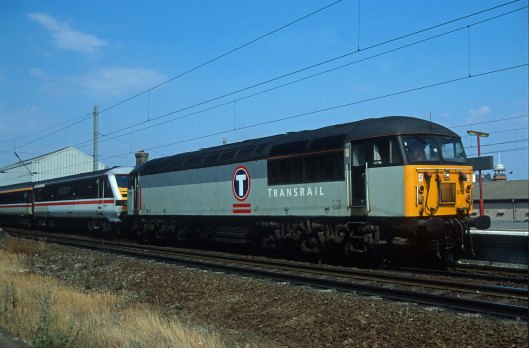