We were up at 6am this morning to give ourselves time to get back into Kaikoura ready for our 08:30am trip to swim with dolphins. It’s an experience I last had 20 years ago so I was really looking forward to seeing Dawn’s face when she got into the water with what can be up to 400-500 dusky Dolphins.

Sadly, it wasn’t to be. The weather had closed in overnight, bringing rain and winds high enough to make it unsafe for boats to leave the small harbour here. All this morning’s boat trips (including whale watching) have been cancelled. These things are always in the lap of the Gods, sadly. As we’ve only a couple of nights here it’s not possible to re-arrange the trip. We’re just going to have to come back another time – just not in another 20 years…!

We consoled ourselves with a wander around the headland at Point Hearn, where we sat on the cliffs and gazed out to sea, hoping to spot a whale, or maybe a dolphin or two, but all we saw was seals and a variety of seabirds. 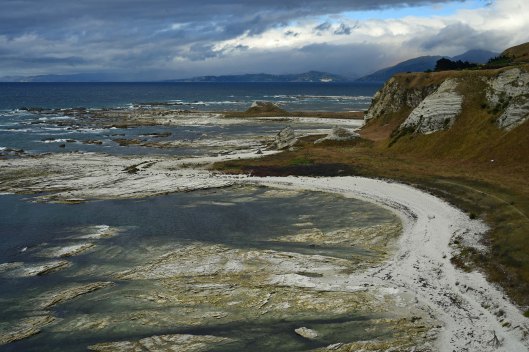 As we watched the planes and helicopters fly out to the area where whales had been reported we realised it was a forlorn hope. Whales may be big, but when they’re miles away and mostly hidden by the sea, you ain’t gonna see much – even with my camera’s zoom lens. The only people getting to see whales today were using one of these as they weren’t affected by high waves!

Our amble around Kaikoura also took in the railway station where we were fortunate enough to be in time to see the daily passenger train from Christchurch to Picton call. By UK standards it’s a small train as it consists of a baggage car, two seated coaches plus a buffet car and an open-sided observation coach bringing up the rear.

DXR 8007 working the Christchurch – Picton passenger service. This locomotive is a rebuild of the General Electric DX class, 49 of which were built between 1972-75. It was stored at Hutt workshops (Wellington) in 1989 after suffering cracked frames. Formerly numbered 5362, it was rebuilt with new 3,300 hp GE 7-FDL diesel engine and smaller bonnet before re-entering service in 1993.

Goodbyeee! The train heads towards Blenheim and Picton

Because all the tours were cancelled Kaikoura was full of disconsolate people looking for something to do – which isn’t easy as the focus of the town is very much tourist tours. Many eateries in town don’t open until after midday – such as the Pier Hotel, a lovely old hotel and bar situated at the South end of town that has great views across the bay – and probably the best location in town. We ended up there for lunch and pigged out on two of our favourites –  mussels and whitebait. As you can see the ‘large’ portions are just that!

We’ve now abandoned Kaikoura as the weather’s worsened. This is the first day where we’ve not been wearing shorts. Instead, we’re in long pants, fleeces and waterproofs! We’re spending the evening in a fabulous mountain retreat Airbnb some 55km South at a place called Lydford before moving on to Christchurch tomorrow. I’ll try and post some pictures tomorrow – when it’s stopped raining!

Whilst it’s been sad to miss out on the dolphin swim we’ve got many other exciting things planned during the next few weeks travels – and the money we’ll be refunded ‘cos the tour didn’t run can always be spent on something else! New Zealand’s South Island has a huge variety of outdoor experiences to offer and we’ll be sampling (and blogging about) quite a few of them whilst we’re here. One thing we haven’t done so far on this trip is travel anywhere by train, but we’ll be putting that right in the next few days…

I’ve a favour to ask…
If you enjoy reading these blogs, please consider clicking on an advert – or two! You don’t have to buy anything, honest! The clicks just help me cover the cost of running this blog. Many thanks, Paul