I’m working from my satellite office in Huddersfield (aka the ACoRP watertower) today as we’ve a funeral to attend this afternoon. Sadly, Dawn’s Uncle, Ronnie has passed away. On the bright side, he lived to the ripe old age of 93 so he had a good innings.

Today’s another Northern rail strike day so the station’s far quieter than normal. The place is littered with Pacers going nowhere. I can’t help feeling these strikes are futile, all they’re doing is losing the railway revenue and goodwill. Passengers are caught between a rock and a hard place with the intransigence of the RMT union and the determination of the DfT. One wants change, the other opposes it. But change is inevitable, it will come whether the union likes it or not – as railway history teaches us. Whether it was arguments about ‘secondmen’ in the past, or new fleets like the ‘Bedpan’ Class 317s being ‘blacked’ over DOO.

Talking of change, I’ve spotted these new PIS screens at the station which have only recently been installed.

They’re far more informative and much easier to see than the old ones. I hope they’re more accurate as well as previous ones weren’t ‘real time’ which meant the delay times were always all over the place as trains often seemed to move backwards and forwards at the speed of light.

This time of day you’d normally expect the stabling sidings to be devoid of Northern stock. Here’s what it’s like now. 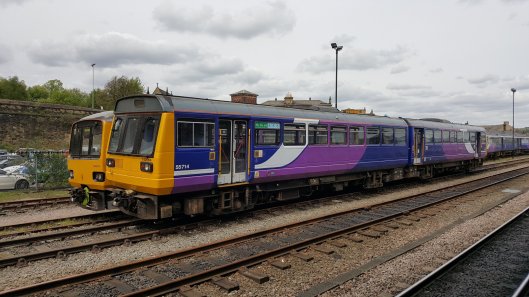