Our Jet Airways flight from London was late into Delhi due to the poor weather back home. The fact our plane needed de-icing meant that we lost our departure slot, so we were nearly an hour late landing. Most people slept on the flight as it was really hot. I’ve never been a great sleeper on planes so I took the opportunity to catch up with some Hollywood films that I’d never pay to see at the cinema -like ‘Thor, Ragnarok’ – a bit of nonsense that filled a few hours although I’m rapidly tiring of the Marvel Comics movie franchise.

We breezed through customs at the airport and our group was soon on a coach heading for our hotel in central Delhi, which is located down a narrow side street we had to walk to as the bus wouldn’t fit. It was worth it, as it’s quite a place – an old Delhi mansion

Today was a day to acclimatise, get to know the local staff who’ll be escorting and assisting us during the trip – and do a bit of sightseeing. 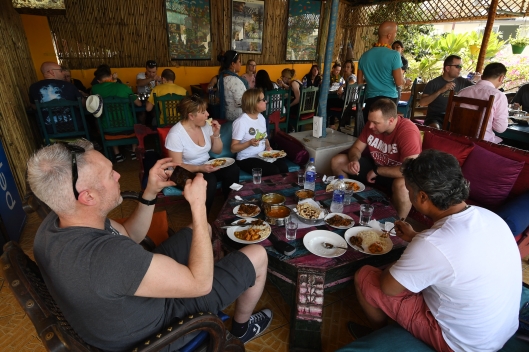 Enjoying lunch in the Hotel’s rooftop restaurant whilst listening to a brief from the local staff.

Our tourist moment was an afternoon visit to Humayun’s tomb, a precursor to the Taj Mahal.

Now jet-lag and lack of sleep’s catching up with me. We’ve a 6am start tomorrow as we’re off visiting some Railway Children projects in Delhi before heading off to Agra, ready to start the main event – the cycling…

Day 2: Morning in Delhi as seen from the roof of our hotel.