Yesterday I blogged about Hs2 getting Royal Assent and how the stophs2 campaign has collapsed. I also mentioned about how the focus has changed to Yorkshire, where there’s a confused and contradictory campaign that can’t make its mind up if it wants to Stop Hs2, or just change the route back to Meadowhall.

Well, more evidence has come to light over just how disjointed and unsuccessful that campaign is. First, let’s have a look at StopHs2 Erewash. This small group is trying to stop Hs2 around Long Eaton. They don’t have a working website so here’s a link to their Facebook page, which is rather instructive. Hs2 antis never did learn that social media is a double-edged sword. It can help you spread your message, but it can also show how weak and divided you are!

A sidebar on their page displays a post that contains a copy of a letter from their local MP, Maggie Throup to her constituents. The letter makes plain that she supports Hs2. Not only that, she also lays into groups like StopHs2 Erewash for deliberately spreading disinformation! 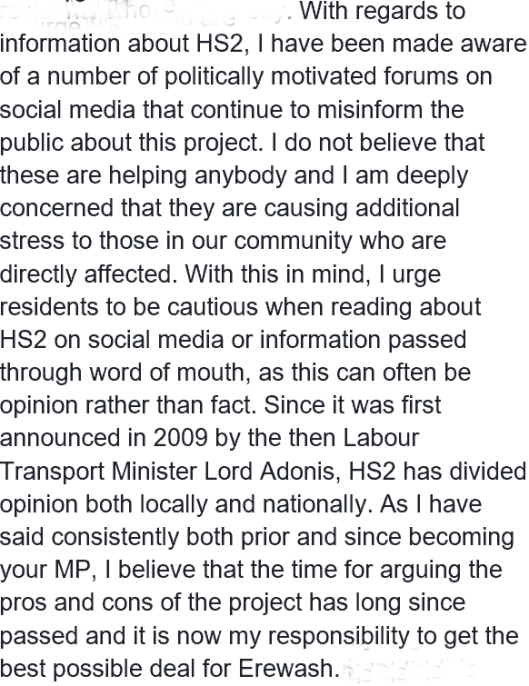 That pretty much sounds the death knell for this group and their campaign. Without the support of their MP this is game over as it’s MPs who vote on Phase 2 of Hs2. StopHs2 Erewash have this event arranged for March 9th. I think its fair to say it’s not going to be graced by their MP!

Apropos of this event, I see some locals aren’t happy with who’s been invited to speak, namely High Speed UK (HSUK). Regular readers will know that HSUK is a back of a fag-packet scheme drawn up by Colin Elliff and Quentin McDonald. They’ve been touting it for years as an ‘alternative’ to Hs2 but no-one’s been daft enough to fall for a scheme that’s just lines drawn on a map, with no real detail about junctions, trains or services. The only thing HSUK have had any success at is persuading a few gullible souls to use them as ‘expert witnesses’ during the petitioning process. That hasn’t gone well either.

Of course, HSUK are also at the event the grandly (and inaccurately) titled ‘YorkshireAgainstHs2″are holding in Wakefield today.

It doesn’t appear to be going well. I’m always suspicious of these events when there’s a noticeable absence of tweets or pictures from them. It’s normally a sign that few have turned up. So far there’s been a very tightly cropped //platform.twitter.com/widgets.js“>video of Green Party leader Natalie ‘brain fade’ Bennett saying a few words put out by the organisers, and a couple of tweets from her – none of which show the audience – and, that’s it, which is pathetic when you think about it. Contrast that with the amount of media (and social media) attention the conference about the Hs2 station design in Sheffield received yesterday.

Considering the this is meant to be Yorkshire (population 5.2 million) against Hs2 and it’s holding the event in Wakefield (pop 327,000) they’re not exactly rocking the Casbah! However, in fairness to them. If they DO show anything that illustrates the size of the crowd, I’ll be only too happy to share it!

The lack of any real political support to try and Stop Hs2 in Yorkshire and the amateurishness & contradictory nature of the groups means they’ve no chance of success. At best, they’ll provide more lessons in how not to run a campaign in the age of social media.

Oh, one more snippet. Even Joe Rukin of Stophs2 has admitted what I’ve been saying all along, that the Yorkshire Stophs2 campaign is divided and without a clear aim! This was posted about today’s Wakefield event;

Of course, in Rukin’s book, “a lot” means something very different to the real world. Hence the poor turn-out today.

I’m posting this at 21:00 when it’s clear the events been a spectacular failure. Hopefully, you’ll be able to view this presentation for the Leader of Wakefield Council, Peter Box. It highlights why their campaign’s so hopeless. It trots out just about every fairy story about Hs2 we’ve ever heard – including the classic ‘Hs2 only saves 20 minutes’

Just like everything else about their campaign the quality of the videos coming out from the event are amateurish in the extreme. This really is Poundland PR…