I’m currently working for Network Rail around Bath, Bathampton & Box tunnel on the Great Western Mainline electrification scheme. It’s a fascinating job that vividly illustrates the problems of modernising a Victorian rail network – especially one that contains so many iconic and listed structures.I’ll blog about this in more detail, but for now I’ll share with you part of the site induction, which gives a historical & technical perspective on the famous Box Tunnel. 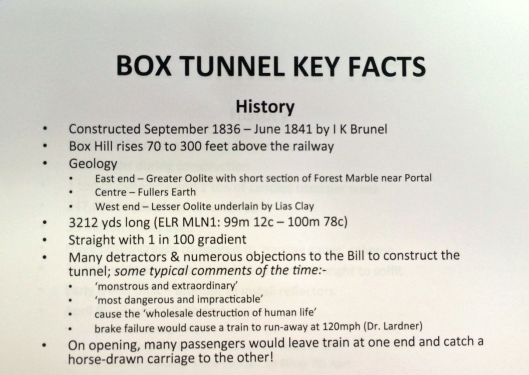 I cracked a wry smile when I read the section on detractors & objectors & their doom-laden prophesies as this reminds me so much of the modern day opposition to Hs2. Plus ça change!

What was more sobering was reading about the death toll. 100. We may chafe at modern ‘elf & safety’ but on the railways it’s a vital component of everyday work.

Right, time to go and put that PPE on…

For once, I’ve actually managed to get myself on the other side of the camera in Box tunnel. Thanks goes to my COSS, Joe Kensley for stepping up to the plate to get a decent pic in very difficult circumstances!

Beam me up Scottie! looking up one of the air shafts in the Box tunnel.

Yesterday was a good day for railways in the North. As well as the start of the Northern electric service a report from the Northern Electrification Task Force, set up by the Transport Secretary to advise the government on which areas it should focus its investment was published.

You can find it here.

Schemes were prioritised into three tiers. Tier 1 (the highest priority) are as follows:

This is great news for the Calder Valley as the importance of the line as a mixed traffic, Trans Pennine route has been recognised. The line is also a crucial diversionary route for Trans-Pennine Express trains when the Colne Valley is closed for engineering route. As the Colne Valley will be electrified in the near future, the Calder would have been useless to TPE’s future electric services.

The report goes on to say “the routes detailed in Tier One should now be taken forward through the production of more detailed business cases with a view to including them in the work programme for the next rail industry ‘Control Period’ (2019 to 2024). Rail North and Network Rail should jointly progress this work and we therefore ask Government to prioritise resources, identified specifically for this purpose, so that work can progress with the required degree of urgency”.

Another good feature of the report is it recommends a rolling programme of electrification beginning with tier 1 but carrying on until all 3 tiers are complete. The other tiers are these. Tier 2 contains eight routes;

Whilst tier 3 contains a further 12 routes;

I would love to think we’ll see such a rolling programme and that (one day) branch lines such as Whitby & Barton on Humber, but I won’t hold my breath! In the meantime, I’ll be happy to see the tier 1 routes included in CP6.

There’s a feeling amongst quite a few people, both within the rail industry, local government and the political arena – that the present Calder Valley service is suppressing demand. Reliability isn’t what it could be, nor is there an express service between Leeds, Bradford & Manchester that could tempt people out of their cars. Electrification could allow this to happen by increasing capacity, speeds & reliability – as well as improving the passenger environment. Now the ball is in the Minister’s court, but this close to an election, don’t expect any announcements until the dust has settled…

Needless to say, there’s a lot in the document and – as always – the devil is in the detail. I’d urge you to read through at your leisure to see the full depth of what’s been considered.