The end to another working week. Well, in theory as weekends don’t mean as much nowadays, especially for freelances like me as it’s nearly 25 years since I last worked in a 9 to 5 job! Add in the effects of lockdown and it’s very easy to lose track of the days or what you’ve been doing, which is one of the reasons that I’ve been trying to write a daily blog.

Today’s routine did vary as after breakfast I left Dawn busy at work in the living room whilst I took a stroll into Halifax to pick up some shopping from Marks and Spencer’s food hall for her parents. It was my first trip into Halifax since the easing of lockdown restrictions, so I was curious as to what I’d find. With the weather being cloudy but warm it was a pleasant stroll. The main roads that I crossed on the way were much busier than has been the new normal but everywhere else remained quiet. It was the same situation in the town centre, albeit there did seem to be a few more people around – although no new shops appeared to have reopened. The pedestrian precinct that M&S is located in was dead. There was no queue to get in the shop but there was inside. We zig-zagged through ladies underwear to get through to the small food hall where staff enforced a strict one in, one out policy and insisted that everyone used trollies (no baskets). I managed to get most of the stuff on the shopping list although it took me a while as I never shop here so I had no idea where to find things!

Glad to be out I headed over to the local health food store to pick up some of the veggie cheeses that we use at home as Dawn is allergic to cheese. They’re coconut based and more expensive than ordinary cheese but they’re tasty and work really well in salads. We use them sparingly and regard them as a bit of a treat which is probably just as well as I spent over £20 just on cheese!

On my way home I stopped to get a couple of shots, just to show how quiet the place was. 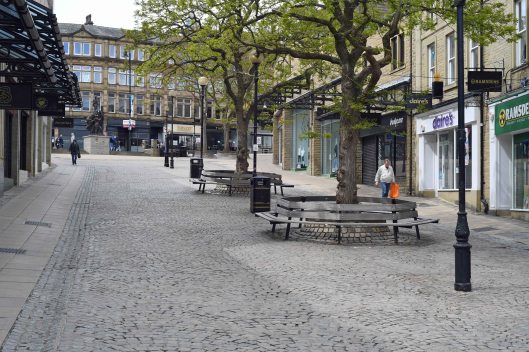 The Woolshops shopping centre with M&S behind me. On a normal Friday this place would be teeming. Thankfully, most people are still staying safe.

Corn Market in the centre of Halifax with the Market Hall to the right. a Handful of shops (mostly butchers) remain open in the market, the rest of the place is deserted.

The Westgate Arcade which leads on down to the Piece Hall, is deserted.

It’s reassuring to see that, despite the Government’s muddled advice, most people have made their own decision to stick with lockdown and stay at home. Sure, there’s always a few idiots who don’t and there’s some fringe political elements on the far-right and left who’re playing on people’s prejudices or paranoia to exploit the situation, but most folks aren’t taken in.

Walking back home with my goodies I traversed equally quiet streets and spent the rest of the day at home scanning yet more old pictures from the 1990s. I was tempting to head outside into the garden to soak up a little bit of sun, but (to be honest) the weather’s nowhere near as warm as it has been and a persistent wind’s taken the edge off it.

This change was obvious when it came to six o’ clock, when it was time for us refugees from the ‘Big 6’ pub to meet via Zoom and recreate the traditional Friday Quiz. Last week many folk were joining from their gardens. This week everybody was inside. The quiz was no less fun and it was lovely to be able to catch up with folks and share a few jokes – even if it was online. I wonder when we’ll be able to do this properly?

Quiz over, the rest of the evening was quite anti-social. Dawn did her thing and I did mine as the pair of us were focussed on other things. On the bright side, I did manage to finish scanning and editing another tranche of slides like this.

If I stood on this platform and took the same shot today, nothing would be recognisable. This is Stratford (East London) on the 7th June 1993. The railway line still exists, but everything that surrounds it has been swept away as the area’s undergone a massive transformation. The first part was due to London’s growing economy, the second part was due to Stratford becoming a major transport interchange. But the biggest transformation was because of the 2012 Olympics.