Wow! I’m way behind with these blogs and desperately trying to find the time to catch up. So much for the idea that there’s nothing to do because we’re stuck at home. It feels like I could do with another month of this just to catch up with all the stuff I’ve been hoping to get done.

It may officially have been the ‘day of rest’ today, but it felt like anything but for me. Whilst Dawn had a bit of a lie-in this morning I was up not long after 07:30 in order to sort out another batch of old slides to scan. I’ve moved on to another album of old railway pictures, this time from 1991. Unlike some of the later albums there’s very few duplicates in it so I have 500 different pictures to scan. As I’m lucky to get 40 done in a day there’s the best part of two weeks solid scanning to get through it. Will the lockdown last long enough for me to get all my old rail slides done? Who knows, so I’m making the most of the time I’ve got.

In between scanning there was the daily chores and everyday life to organise. I was on coffee duty this morning but Dawn made us brunch, which was something very different from our normal fare. Dee made the both of us fresh, home-made pancakes in what turned out to be a bit of a production line. We ate them straight out of the pan with freshly squeezed lemon and blueberry’s and they were gorgeous – although I may have made a bit of a pig of myself by eating six! 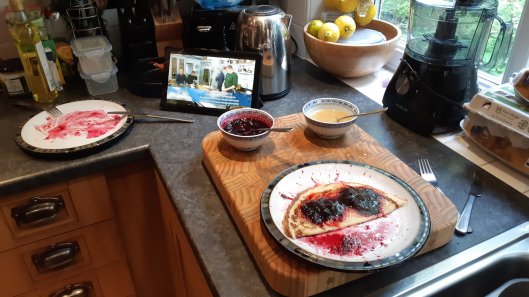 The pancake production line with the stove and two frying pans on the go just out of shot to the left. Cook and scoff!

After brunch we divided our time between different jobs. Whilst I worked in the office scanning more old slides Dawn got stuck into some DIY and a project she’s been wanting to do for a while. The porch to the cottage has been overdue for a repaint for a few years now and with the improving weather it’s an ideal time to tackle the job – which Dee did with gusto! I could hear the furious wire-brushing and sanding from my office upstairs – along with the occasional shouts for advice or plea for supplies of refreshments.

And so the day passed – although I’ve no idea how it did it so quickly. Once the porch was prepared and Dee was occupied clearing up I pinched the ladders to clean all the back windows to the cottage. Well, if we’re going to be stuck indoors we might as well have clean windows to gaze (whistfully) out of!

I’d offered to cook a stir-fry this evening, using some of the Tofu we’d bought from the Moorcock shop, plus some Tempeh I’d spotted in our local Tesco’s. I marinaded both for a few hours in a mix of soy sauces, herbs and spices to give them a flavour boost before cooking them with some of the Moorcock’s organic veg and a load of rice noodles. The result was delicious, although I’m hoping none of the neighbours had any windows open as the mix of chili’s and spices certainly caught the back of the throat as they cooked!

Having eaten I worked off some of the calories by going for an evening constitutional up and down our road as it was too dark to stray through the woods to venture further. Evening time’s ideal to do this as it’s so quiet here. I spent 30 minutes to-ing and fro-ing without seeing a single car on the road. Bliss! Despite the enormous disruption the lockdown has caused to everyone’s lives there’s things I’m going to miss when things return to normal. The absence of road traffic being one. It’s been lovely to have the roads so free of vehicles.

The slides I’d scanned earlier are now on my Zenfolio website. I’ve started where I left off a few weeks ago with a previous album, which contained pictures of the open day at London’s Old Oak Common locomotive depot taken in August 1991. Here’s a sample.

A line-up of (mostly) preserved locomotives, including a trio of old Western region diesel-hydraulics that were once synonymous with Old Oak Common. At the time, who would have thought this depot would disappear? The whole area was razed a few years ago to make way for stabling sidings for the Crossrail train fleet. Now it’s not just the locomotives that are a memory…

You can find the rest of the pictures from the open day in this gallery. I’ve still a few more to add, which should get done in the next day or two. I’m looking forward to another busy week at home with plenty to keep me occupied, including catching up on a bit of blogging as I’ve been a bit tardy this weekend. Watch this space…