After having such fabulous weather on the first day we knew it was too good to last. The storm we were warned about didn’t materialise last night, but boy, did it rain! By the time Dawn and I woke up the storm had passed and, although the weather remained cloudy, the sun did make valiant attempts to break through. Because of this we decided to visit Wicklow town before moving on. One of the most interesting areas is the coastline just South of the harbour, which is still a busy little places used by fishing boats and commercial shipping. There’s also a lifeboat station and a selection of old muzzle loading cannon mounted atop the promontory. But the oldest piece of human history is the ‘Black Castle’, built in 1169 and first destroyed in 1301. The ruins are in a very dramatic location, especially in stormy weather with the sea crashing against the cliff! 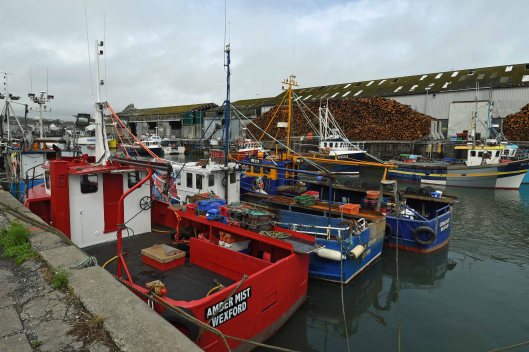 An interesting exercise in recycling. These lobster/crab pots are made out of old plastic containers.

Moving on from Wicklow we headed inland with the intention of travelling through the Wicklow mountains and visiting the historical site of Glendalough. Then the rain returned! By the time we got into the mountains it was chucking it down, so we decided against inspecting ruins in torrential rain and drove through the gap to Hollywood. Apparently, there’s some fantastic views to be seen. Only not today!

Defeated by the weather we drove on to Hollywood for a pub lunch. The weather improved momentarily, but as soon as we left the rain closed in once again and it poured down all the way to Thurles, which made driving on the motorway very difficult for Dawn. However, we made it without incident. We’re now tucked up in the hotel ready to meet up with the groom to discuss tomorrows wedding.