07:13 (all times in German time for now).Another day, another early start. The weather’s pretty dismal in Vienna today but there’s lots to look forward to before I fly back to the UK later. At least I managed some decent sleep – even if there wasn’t enough of it! Here’s the view from my hotel room, looking back to the hill and the location of the vineyard we ate at last night.

The hotel’s in two parts as there’s offices above until you get to the roof, where there’s a restaurant and bar. Here’s the view from last night.

08:35After an excellent breakfast we’ve checked out of our hotel and been loaded into a coach to head off to our first assignment. The chance to see an autonomous bus at the new Viennese suburb of Aspern Seestadt.10:08.Here’s the bus we came to see. 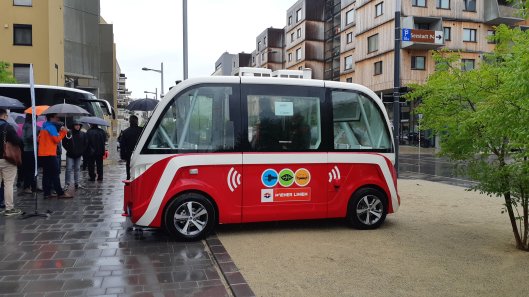 The whole area’s fascinating. The suburb’s designed to be a modern city that has a low ecological impact. I’ll add some more details and links later. Right now we’re on the move again..11.29.We’re currently being conducted around Siemens Vienna factory which is building a variety of main line, metro and light rail vehicles. Here’s new vehicles being constructed for Nuremberg.

This is one of the cars for the Rhine-Ruhr Express. 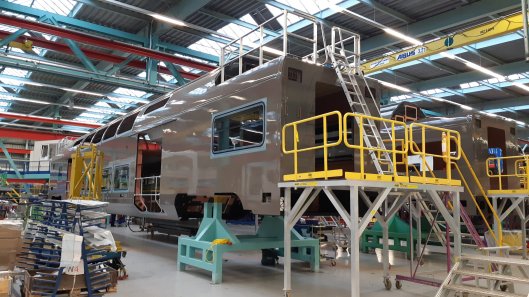 It’s been a fascinating tour of the Siemens factory and chance to learn a lot about developments at the plant since my last visit in 2012. I’ll add more pictures and details later. Right now it’s time to head off to the airport and begin the journey back to the UK…

A small group of the British contingent and a friend from Siemens UK are now camped out at Vienna’s Terminal 3 where we’ve got a couple of hours to kick our heels before we catch the plane to Heathrow. Sadly, this new terminal has been ‘Jamie Olivered’. I’ve nothing against the guy but when all three eateries in the place are his, it’s a bit overkill!

I’ll add more to the end of this rolling blog when I get home. Right now, another day’s got in the way!