I’ve had a bit of time on holiday to crunch these numbers, so here’s the final series of the year (predictable as they are). Remember that the final few months of 2018 was meant to see the ‘relaunch’ of the anti Hs2 campaign? It never happened. Not only that, but their last ‘great white hope’ – a BBC Panorama programme that they’d worked themselves up into a frenzy about as it would provide the ‘killer evidence’ that would see Hs2 off once and for all turned out to be a damp squib. Aired on the evening of the 17th of December, it made barely a mention in the wider media – manly because there wasn’t a single new thing in it! You can read about it here.

After that, to quote Marvin the Paranoid android, they ‘went into a bit of decline’. It’s clear that the majority of politicians minds are elsewhere in the run up to 2019. Even Stophs2 gave up posting and tweeting before Xmas as it’s obvious they’re wasting their time.

Anyways, Here’s a look at their social media stats. First up is Facebook. 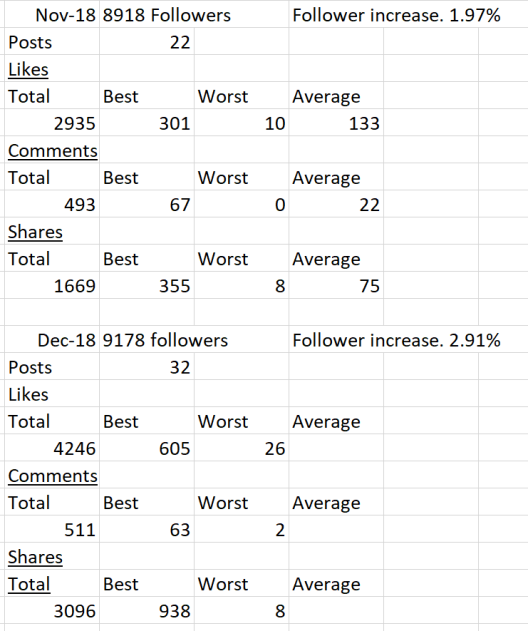 As you can see the only real improvements are to their headline numbers due to people desperately trying to draw attention to the Panorama programme – although many comments on their Facebook page make it clear people were disappointed with it. They have managed to increase their Facebook followers by nearly 3% but as that’s from such a small starting number (after 10 years) it’s not something to boast about. 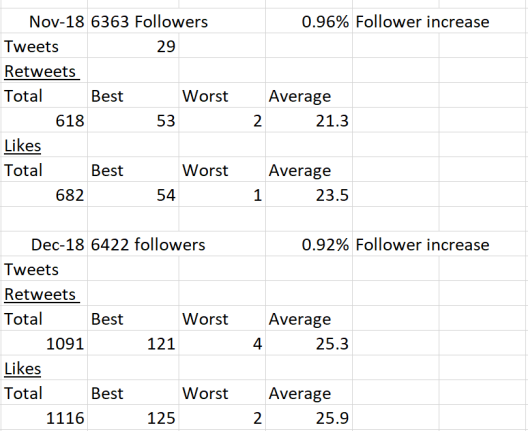 It’s becoming clear that Twitter’s a complete waste of time for them. The only thing it does is show how few of their followers actually bother with it. Remember that headlines behind these numbers. 6.5 MILLION people live on the route of HS2, so 6363 ‘followers’ (and how many of them are real I wonder?) are a tear in an ocean.

As with previous months a browse of their tweets/posts show that the majority are copies of media articles about HS2. Not a single one of them is news about the StopHS2 ‘campaign’ for the simple reason that – there is no news. They’re not actually doing anything! Sure, the media still trot out Rukin & Gaines for interviews, but they always have. There’s not even any news from (the increasingly scarce) local groups anymore. What both social media accounts show is that StopHs2 has little in the way of heavyweight support – and that’s putting it politely! In fact, both their accounts are refuges for the old ‘green ink’ brigade. who (in an earlier age before social media) would’ve had their ranting, batshit letters spiked by the newspapers they wrote to!

That said, there is one bit of news they’ve ignored reporting completely! Instead, it was slipped out by lawyers. Hs2aa, the ‘real’ brains behind the stophs2 campaign (StopHs2 were always strident, student politics types due to Rukin’s background) folded In 2017, but before they did they mounted a last gasp legal challenge under the Aarhus convention. Last month that was finally rejected, hammering the final nail into HS2aa’s coffin.

2019 is going to be a very bad year for StopH2, if they can be bothered to come back off their rather long Xmas hols…