Whilst most attention is focussed on the various electrification schemes across the North-West and Pennines, other work to upgrade lines in the North is going ahead with little fanfare. One such scheme kicked off this month with work starting on upgrading the Calder Valley line across the Pennines.

Work’s already been completed between Manchester Victoria and Rochdale, the highlight of which was the opening of a new Western facing bay platform at the end of October 2016. Now the focus moves East from Littleborough towards Bradford. Between now and October 2018 a series of work that includes station improvements, resignalling and track lowering (as well as the opening of the new station at Low Moor) will see speeds raised from 55-60mph to at least 70mph (and in some cases 90mph, although I’ve been told these could be too short for drivers to take advantage of). Whilst there’s been extensive track renewals along the line in the past decade, with the remodelling and renewal of Bradford Mill Lane Junction, renewal of Dryclough Jn and long lengths of the Up line either side of Mytholmroyd, some plain line still dates from 1966.

As well as adding capacity for extra services the work will reduce journey times, meaning that a Bradford – Manchester trip (with four stops) will come down from 58-61 minutes to 53-54 minutes. Whilst the time savings are modest at present, the increased linespeeds and smaller sections between signals will increase the resilience of the service and reduce delays.

Four signalboxes will be abolished and control of the line will be transferred to York ROC. The boxes to close are Hebden Bridge, Milner Royd Junction, Halifax and Bradford Mill Lane – where the junction will have new crossovers installed to enable more parallel moves and facilitate increased services between Halifax, Bradford and Leeds.

Network Rail has already confirmed dates for some of the work taking place between now and June. These are;

Work on a new footbridge at the listed station of Hebden Bridge is expected to start in January 2018. The bridge (which will be fitted with lifts) will make the station fully accessible as the current subway ramps don’t meet the required standards. UPDATE: It’s since been confirmed that this was incorrect. Hebden Bridge won’t be getting a footbridge. Instead, lifts will be installed in the old lift shafts at the station. At a later date, the Down platform will be extended West to allow trains to stop within the modern signalling overlaps. As more dates are announced for other work, I’ll try and post them to this blog. There’s clearly a lot more work to do. Strings of new rail have been dropped just West of Milner Royd Jn and the ‘Orange Army’ have been busy around Halifax over the weekend. Sowerby Bridge has seen a lot of lineside vegetation clearance and there’s many sites in the Calder valley where new cable toughing has appeared.

Meanwhile, here’s a series of pictures of what you can expect to see, and what you already have…

Relaying the Up line West of Mytholmroyd station in 2014. Now the old ballast base has been  dug out and replaced the Road Rail Vehicle (RRV) moves in to drop new concrete sleepers into place.

In 2008 Mill Lane Junction at the approach to Bradford Interchange was replaced, with capacity added. A decade later, it’s going to be rebuilt to have yet more capacity added – allowing multiple entries/exits at the same time. This is a good illustration of how the railways have gone from rationalisation to expansion. In the background is Mill Lane Jn signalbox which will be abolished under the resignalling programme.

Milner Royd Jn signalbox is of historical interest as it’s the only surviving example of the work of a small company called Smith and Yardley. The box was built in 1878 but will be made redundant in the next couple of years. 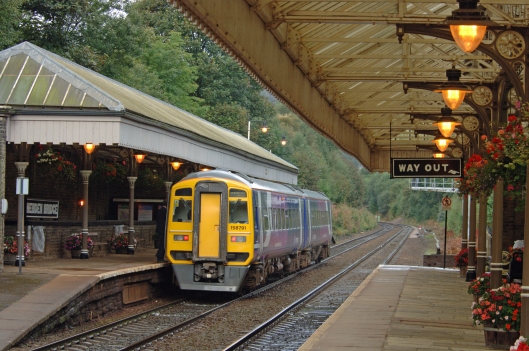 The listed station at Hebden Bridge is a delight. The platform I’m standing on (the Bradford bound side) is the one that’ll be extended in the direction of the photo. 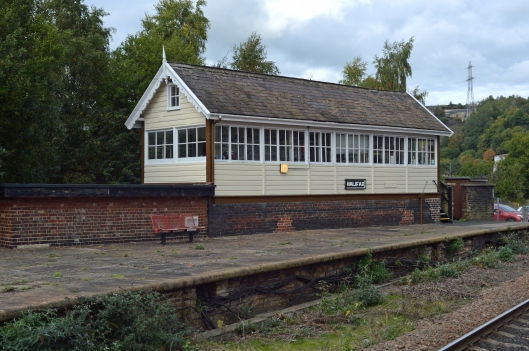 Halifax signalbox (formerly Halifax East) was built by the Railway Signal company in 1884.

Hebden Bridge signalbox was built in 1891 by the Lancashire and Yorkshire railway. It’s a great example of their standardised, prefabricated design produced at Horwich. The box is listed Grade 2.

The modernisation of the Calder Valley route reflects its new importance as a vital freight artery as well as a growing passenger railway. The last year has seen the line used by biomass trains from Liverpool Docks to Drax power station, stone from Arcow quarry on the S&C to Manchester and waste from Knowsley (Liverpool) to Wilton. There’s also daily trains moving the remaining coal stocks from the closed Ferrybridge power station to Fidlers Ferry. 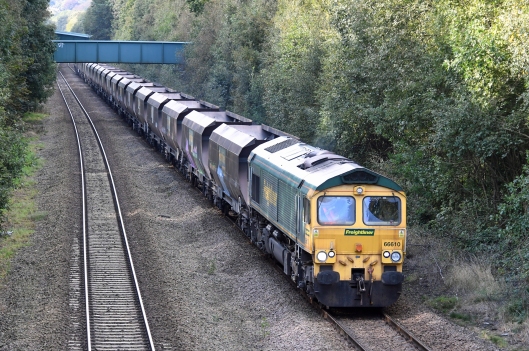 66610 hauls an empty rake of coal wagons from Fidler’s Ferry to Ferrybridge past Mytholmroyd.

Of course, it’s not just freight. The Calder Valley is an important diversionary route for Trans-pennine services when the Diggle route is closed for engineering work. When electrification of that line starts, the Calder valley’s enhanced capacity will be extremely useful. 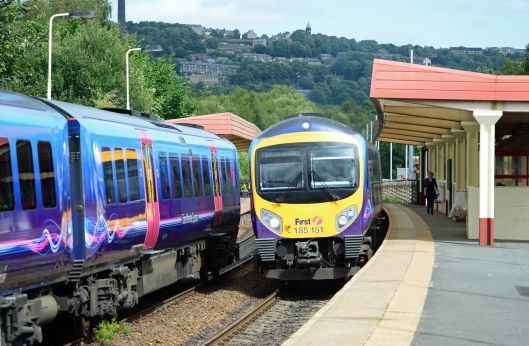 A pair of TPE class 185s pass at Sowerby Bridge station on the 7th August 2016 when the Colne valley route was closed for engineering work.

2 thoughts on “The Calder valley line sees £100m of improvements”