When I moved to from London Yorkshire in 2010 one of the first things I noticed was how much time the county spent in internecine political battles and rivalries. Sheffield, Bradford, Leeds, Doncaster and Wakefield seemed like a bunch of warring states, all fighting against each other over something (or nothing). It sometimes feels like Yorkshire takes itself rather too seriously. I mean – name another English county that has its own political party (Yorkshire First)!

Now tykes really have got something to fight over. Hs2.

Today’s been a cracking example of this. The latest consultation over Hs2 Phase 2 closes today and the ‘war’ between Doncaster and Sheffield over  the new route through South Yorkshire is hotting up. The Mayor of Doncaster, Ros Jones, has taken to Twitter to launch Doncaster’s response to the consultation and made the most curious claim whilst doing it…

The “route nobody asked for”? I’m not sure Sheffield or the city’s local newspaper, the  Sheffield Star will see it that way. After all, it was the Star that ran a (successful) campaign to get the route changed in the first place! As the paper said at the time, 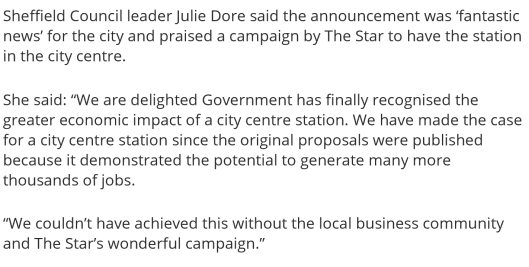 Personally, I can see the pro’s and con’s of both routes so it will be interesting to see who prevails in the end. If anything, my money is on the new route. That’s because things have changed since the original one was announced. The concept of the Northern Powerhouse has become something far more real. We now have Transport for the North and Northern Powerhouse Rail (nee Hs3). TfN is driving the regions transport strategy and Hs2 and NPR (linked together) are very much part of it and I suspect the new Hs2 route fits in with that strategy more than the old one.

That said, as someone who originated from the other side of the Pennines, I can imagine my fellow Lancastrians cracking a wry smile at the antics of their ever-warring neighbours. Which is more attractive to business. An area that’s managed to put most of its differences aside (look at Manchester and its neighbours). Or the contestant battles and jockeying for position that they observe this side of the chain?

My final observation – whatever happens, it’s very bad news for anti Hs2 campaigners in Yorkshire, because one thing’s clear, the vast majority of the counties politicians and business leader are fighting for Hs2 – not to stop it. This is about who reaps the benefits. Remember, only two of the counties 51 MPs voted against Hs2 Phase 1. To argue over the benefits you first have to agree to build it and there’s little doubt that’s exactly what MPs will agree to do. This means that Yorkshire Hs2 anti’s tactics have fallen at the first hurdle. They’re making the same mistake as the phase 1 antis did by trying to challenge at a local level the business case for a national infrastructure project. As soon as MPs vote through the Phase 2b Hybrid Bill at 2nd reading their arguments are moot. When it comes to hearing petitions a person or organisation will only have locus standi (the right to be heard) if a petitioner’s property or interests are directly and specially affected by the Bill. As we’ve seen from the phase 1 hearings, the Ctte’s take a dim view of a petitioner trying to argue that Hs2 is the ‘wrong’ project or there’s no economic justification for it as Parliament has already decided there is. As most of the antis time seems to be wasted in exactly the wrong sort of arguments, it’s easy to see why they’ll fail.

9 thoughts on “Yorkshire picks a fight with itself (again), this time over Hs2.”