These days, observing British politics is a surreal and scary experience. The Tory party conference especially so. I actually thought I’d switched on a repeat of an old UKIP one by mistake when I heard the anti foreigner rhetoric and the plans to make companies ‘register’ all their foreign workers. and ‘name and shame’ them if they don’t employ British workers. After all, the idea is crass enough, xenophobic enough and stupid enough to have come from UKIP, but no. It really is the party of Government who have suggested it.

However there was another surreal event at conference, which was to do with the StopHs2 campaign and it was more comical and farcical than anything.

Campaign group StopHs2 ‘launched’ a new ‘briefing paper’ at a fringe meeting yesterday. Laughably they tried to pretend it was bigger than just them by roping in other old names, namely Hs2aa and AGAHST, which is rather amusing as AGAHST bit the dust some years ago, as you can see from their abandoned website   Nothing’s been heard from them for years but their former Communications Director, Deanne DuKhan did attend for appearance’s sake. Poor Deanne never did get much right during her time at AGAHST, as this missive she penned in April 2012 shows. A search of the internet doesn’t reveal any trace of her in relation to Hs2 and AGAHST since 2013, which is rather odd as she’s the sole remaining Director!

The ‘briefing paper’ that was launched by StopHs2 can be found here.

It’s essentially a 16 page rambling rehash of anything and everything (and anyone) that they can find that’s ever been critical of Hs2. It also contains some outright lies which (despite them having been exposed) they’re still trotting out – like this one: 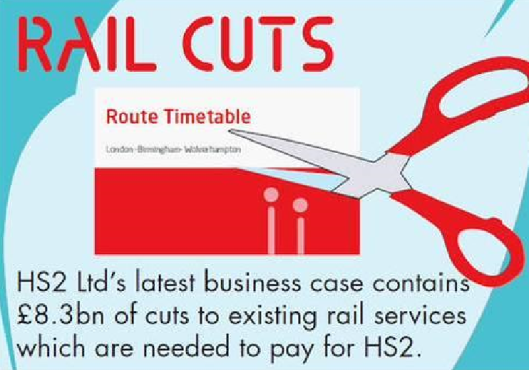 I exposed that one way back in February 2015 (see here)

StopHs2 say “The paper will be circulated to all MPs and Lords following party conferences”. Talk about a waste of time! There’s not a cat in hell’s chance of anyone stopping the phase 1 Hybrid Bill this late in the day. MPs won’t be debating it again and the Lords can’t stop Hs2 at 3rd reading, which is expected in November-early December. Plus, if this regurgitation of old arguments couldn’t stop Phase 1, there’s no chance of it stopping phase 2 (even if anyone remembers it by then).

Even everyday anti Hs2 protestors seem to have twigged this, as this comment on the StopHs2 Facebook page reveals.

Which rather says it all. Today Teresa May closed the Tory party conference with a clear commitment to build not just phase 1 but also phase 2 of HS2. “We will press ahead with plans for HS2” she said, echoing the earlier statement to conference from of her Transport Minister, Chis Grayling.

Stophs2 might as well have saved their money and chucked their ‘briefing paper’ straight into the recycling bin. All they’re doing is rearranging the deckchairs on the Titanic…

1 thought on “StopHs2 rearrange the deckchairs on the Titanic…”