In light of recent events I debated whether to change the title of these daily blogs but decided against it as Dawn and I are following the original advice for the foreseeable future. Certainly for the next couple of weeks minimum until we see what unfolds now that the English Government’s kicked the arse out of its own advice!

The pair of us have plenty to get on with for the forseeable future. We were both up early this morning so whilst Dawn did her training before work I headed into the office to set up the next batch of slides from 1999 ready for scanning. I’ve only a dozen pages to do, so I’m hopful I can have them finished by next week.

Whilst the scanner worked its (slow) magic I managed to catch up on some blogging too, so the day certainly started productively. I even managed to fit in a meditation. The weather was as stunning as ever, which made me want reticent to stay cooped up in the office but there was no other option. Slide scanning’s not exactly a mobile process! My compromise was not to go for a long walk but break the day into two sections. I’d spend a couple of house scanning, then go far a fast, 15 minute power walk up through the woods along our road before holing up in the office for another couple of hours. This, combined with getting up early, meant that I ploughed through the pictures I’d planned in good time. So much so that I had time to grab some cheeky time in the garden catching up on emails and blogging via my smartphone. I’ve been so grateful that we’ve had so much sunshine this year. I don’t know how I’d have coped otherwise as I miss not being able to get away for my annual Asia fix. Of course, sitting in the garden means I’m surrounded by all the wonderful birdsong and activity as well as being able to enjoy watching the garden break out into its summer finery. The Lupins are especially rampant this year and have survived the recent high winds unscathed.

The day flew and before we both knew it we were due back at the vets with Jet, who was due a check-up. The poor boy’s still struggling a bit, so we were pleased when the evrt gave him a thorough examination and told us that, apart from a couple of minor things to do with his recent ailments (like the stitches where he’d had teeth out) he was doing well. His medication was changed and he was given an injection to ease his bowels as we’ve gone from a shitty cat to a constipated one! Jet seemed quite happy on the way home. He sits on my knee in his cage and I normally open the lid as he’s a curious cat and like to watch the world go by. Today we opened the window for him and he leaned out like a dog!

Back home I managed to grab the last rays of the sun as I watered the garden before retreating back to the office to upload the pictures I edited to my Zenfolio website. There’s a real mixture, so they’re in several different galleries. You can find them all by following this link, but I’ll add a couple here as a taster. Here’s the first, which has a bit of a story… 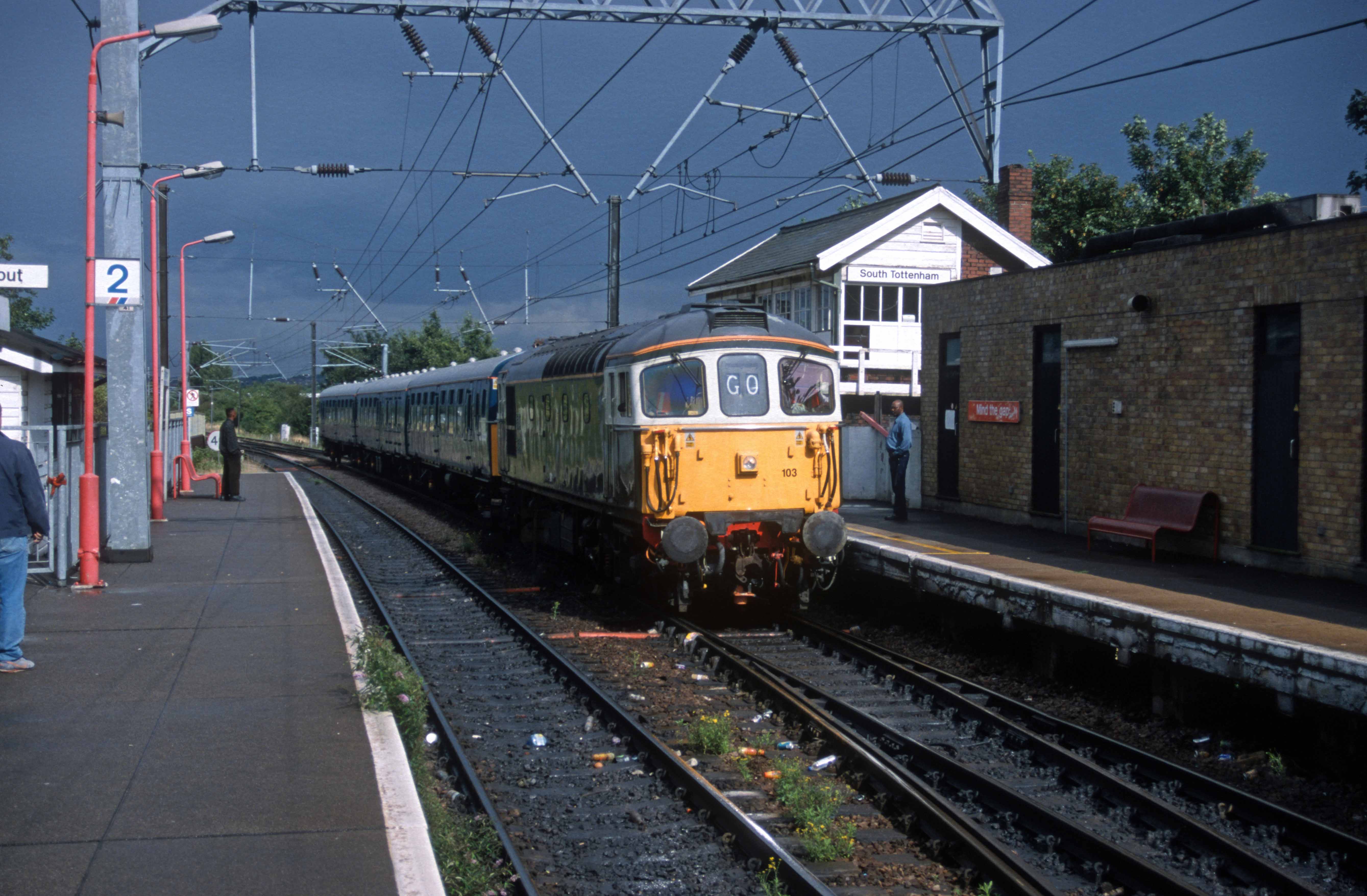 Back in 1999 I was living in Crouch End in North London and this was one of my local railways. It’s the Gospel Oak to Barking line, known affectionately as the ‘GOBLIN’. It was always a Cinderella line and I’m going to do a separate blog about the line as it was then because it finally got to go to the ball in the past few years.

Back in 1999 the train service was appalling. It was operated by ‘Silverlink’ who only had some clapped out ex-BR old diesel units to work it and they were permenantly breaking down. ‘New’ trains were due to be cascaded from the Birmingham area but things got so bad that for a few days this combination was hired in to provide a stop-gap. Here we have a former Southern Region Class 33/1 number 33103 and an unpowered former Southern trailer set (known as TC sets) No 417 calling at South Tottenham with the 15.38 Barking to Gospel Oak service on the 18th August 1999. As you can see from the colour of the skies, it was a stormy August!

The Silverlink network also encompassed regional and suburban services out of Euston and also covered the Bedford to Bletchley line, which shared the same fleet of clapped-out diesel units as the GOBLIN. A different solution was found for that line by hiring in a couple of locomotives and a pair of coaches from a company called Fragonset.

On the 22nd September 1999 Class 31 No 31452 brings up the rear of a service to Bedford as it leaves Bletchley. Eventually, they too were replaced by Class 150 DMU’s cascaded from the Midlands.

Tomorrow the weather here is finally meant to turn and bring some much needed rain, so I expect to be kept busy indoors editing and catching up with more blogging. Watch this space…

I’ve a favour to ask.

If you enjoy reading this blog, please click on an advert or two. You don’t have to buy anything you don’t want to of course (although if you did find something that tickled your fancy would be fab!), but the revenue from them helps to cover some of the cost of maintaining this site – and right now (because of Covid), us locked-down freelances need all the help that we can get…